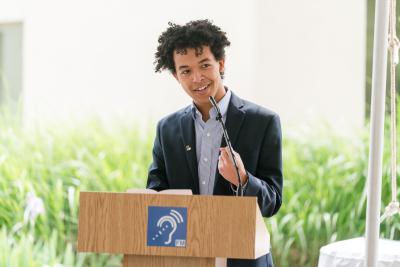 A conference room at the John Marshall Library in Alexandria now bears a plaque in Jasper’s honor. The current FCPL Board of Trustees voted to confer the honor.

Naming a free, public space after Jasper is appropriate, as in life Jasper felt it was important that community members had a place to gather, said Fran Millhouser, chair of the FCPL Board of Trustees .

“The best thing about naming something after someone is people say, ‘Who was this guy? Who was this woman?’ and then you get to tell the whole story and they get to reflect about how they can take a time piece of Will’s personality,” said Jeffrey McKay, chair of the county Board of Supervisors.

He was always happy to see Will on the list of people with whom he was meeting on a given day, McKay said. The world needs more positive people like Jasper, the chairman said.

Jasper’s grandson spoke on behalf of the family. “He knew how to show up for his community, and his family,” said Isaac Feldman.