Board of Supervisors to Hold Nov. 9 Public Hearing on Proposed Redistricting Plans 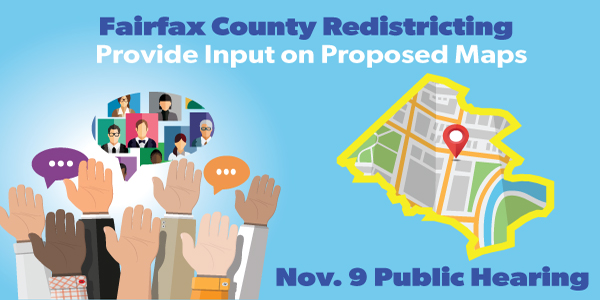 Today, the Board of Supervisors authorized a public hearing on Nov. 9 to consider proposed redistricting plans.

These plans propose new local election districts for the Board of Supervisors and School Board, and after the new districts are adopted, they will be in place for the next 10 years.

There were 64 plans submitted in total by the board-appointed committee established to recommend new maps and the public, and these plans may be reviewed through an online dashboard.

People without a computer or internet access can visit a public library branch to access a computer, or call 703-787-4962, TTY 711, to find other locations, or they may contact the Office of the Clerk for the Board of Supervisors at 703-324-3151 to make arrangements to view the materials.

The public is strongly encouraged to submit input or comments on these plans before the hearing, as well as provide testimony on Nov. 9 at 3 p.m. at the Fairfax County Government Center. Submit input by email, mail, video or phone, or sign up to speak at the public hearing.

Redistricting is the process to draw new electoral boundaries to ensure proportional representation as populations grow and shift over time. It is done to create election districts with roughly equal numbers of people, and this legally required process takes place after every decennial Census that counts every person living in the country.

Of the 64 proposed electoral maps, 24 were submitted by the committee, and 40 were proposed by the public.

Currently, there are nine Board of Supervisors and School Board election districts. By state law, Fairfax County may have as few as five electoral districts or as many as 11.

During the map drawing process, the committee and the public used the same mapping software to create their redistricting plans. The plans were publicly posted for review and comment during this time.

When the current district boundaries were established 10 years ago based on the 2010 census results, the population ranged in size from a low of 109,326 people (Mason District) to a high of 127,501 people (Mount Vernon District).

Under the Board of Supervisors’ legal and policy criteria for redistricting, the population deviation between the most and least populated districts must be less than 10%. State law requires that Fairfax County’s Board of Supervisors be composed of one chairman elected at-large and one district supervisor elected from each local election district.

To determine the county’s population for redistricting, state law requires the county to use Census data as adjusted by the Virginia Division of Legislative Services. This state agency reallocated people incarcerated in federal, state and local correctional facilities in Fairfax County to their home jurisdiction.

In June, the Board of Supervisors appointed a 20-member Redistricting Advisory Committee to recommend new electoral maps. The group reflects the county’s diverse population, and it includes representatives from the African-American, Hispanic, Asian/Pacific Islander and Arab-American communities.

Following the Nov. 9 public hearing, it is anticipated that the Board of Supervisors will adopt new local election districts at their meeting on Dec. 7. By state law, the districts must be adopted by ordinance, and they become effective immediately once adopted, subject to certification by the Virginia Attorney General in accordance with the Virginia Rights of Voters Act of 2021. Board of Supervisors and School Board members who are in office when the ordinance is adopted will complete their terms of office, representing the districts as then constituted in the ordinance.