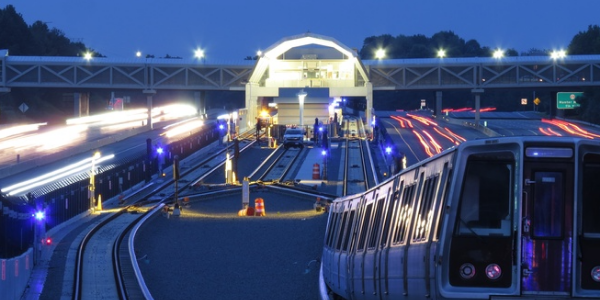 All aboard – in the near future – to Reston, Herndon, Dulles International Airport and beyond.

Earlier this month, the Metropolitan Washington Airports Authority (MWAA) announced substantial completion on Phase 2 of the Metrorail Silver Line extension project, which consists of 11.5 miles from Reston to Loudoun County.

Substantial completion means most of the construction is complete allowing for the operational testing to begin, a key step toward MWAA delivering the new rail line extension to the Washington Metropolitan Area Transit Authority (WMATA), the operator of Metrorail. WMATA will ultimately decide when the new line extension opens for service.

Phase 2 Silver Line stations in Fairfax County, from east to west, include:

As part of Phase 2, Fairfax County is constructing two park and ride garages to add approximately 3,950 parking spaces, as well as active transportation, ridesharing and transit amenities into the transportation system:

Navigating the Infant Formula Shortage
As the nationwide infant formula shortage continues due to a temporary shutdown of the plant that manufactures about half of the U.S. supply, local families are impacted, too.
Lights Are On - But New Silver Line Stations Are Not Yet Open
Your Field Guide to Battle Mosquitoes
Close
Fairfax Virtual Assistant