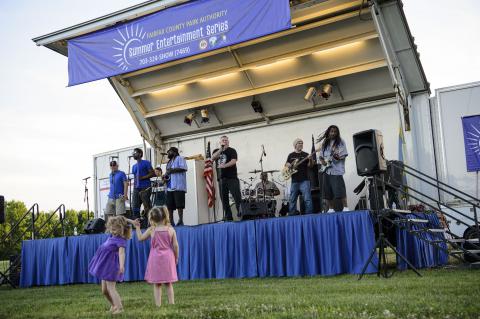 Mark your calendars for another season of free concerts, children’s performances and drive-in movies in Fairfax County Parks. The Summer Entertainment Series returns on Friday, June 7, 2019, with a performance by the West Potomac High School Jazz Band at Grist Mill Park.

From June through August, the Park Authority carries on the American tradition of summer concerts by offering musical performances ranging from acoustic to zydeco at parks throughout Fairfax County. There also will be children’s performances, international song and dance nights, and drive-in movies.

The 2019 Summer Entertainment Series will feature the following:

For details on each series, go to Summer Entertainment Series. Search by location, performer or musical style.

Concerts and movies are held outdoors and may be cancelled in the event of inclement weather. Call 703-324-SHOW (7469) one hour prior to the start of the show for updates.

The free performances and movies are made possible thanks to a strong partnership between the government, business and non-profit sectors to benefit the people they serve. They are funded through private donations, which pay for performers’ fees. All other activities are implemented by volunteer support groups who care for the park and its programs.