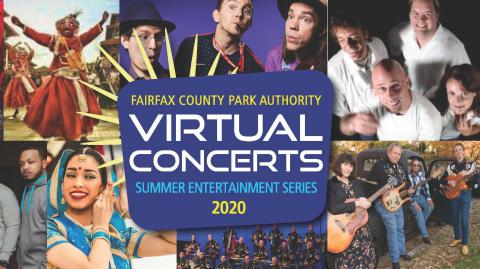 Summer is almost over, but the music still heats up as the Fairfax County Park Authority’s virtual summer concert series approaches the finish line with six great performances.

The concerts are broadcast live via Facebook each Thursday through Sunday evening at 7:30 p.m. Arts in the Parks shows for children livestream on Saturday mornings at 10 a.m.

These concerts will only be available as Facebook livestreamed events. You do not need a Facebook account to view the concerts. The complete concert schedule, with links to join the concert live and information about the performers, is available on the Park Authority’s Summer Entertainment web page.

For more information, contact the Park Authority at 703-324-8700, or send an email to parkmail@fairfaxcounty.gov.