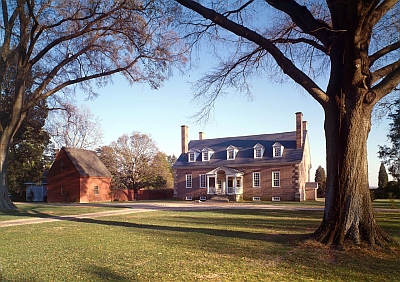 Gunston Hall was the plantation seat of George Mason IV. The Mason family probably came to Virginia in the 1650s, and by the eighteenth century were clearly members of the gentry. George Mason was born in 1725. In 1749, he was elected to the vestry of Truro Parish and became the treasurer of the Ohio Company. He despised politics and preferred staying at home on his 5,000 acre plantation to traveling to Williamsburg or other distant places. In 1750, Mason married Anne Eilbeck, of Charles County, Maryland. His large family of nine children were raised and educated at Gunston Hall. Following the death of Anne in 1773, Mason remained a widower for seven years before taking a second wife, Sarah Brent, in 1780.

George Mason is best remembered as the author of the Virginia Declaration of Rights (1776), and the Fairfax Resolves, a local version of the non-importation agreements that were so popular in the pre-revolutionary era. In 1787, Mason was one the members of the Virginia delegations to the federal Convention in Philadelphia. He refused to sign the Constitution, however, because it did not include a Bill of Rights. Mason helped lead the Anti-federalist campaign against adoption of the Constitution by Virginia. In June 1788, his side lost. Mason died in October 1792.

Gunston Hall remained in the Mason family until 1866, and was a private residence until 1949. One of the owners during this period was playwright Paul Kester. Another was Colonel Edward Daniels. Daniels, a mining engineer, was the first state geologist In 1950, Gunston Hall opened as a house museum. Gunston Hall has been the subject of three restoration projects during the 20th century. The first was undertaken by Louis and Eleanor Hirtle, the last private owners of the structure. In 1950s, a team headed by Fiske Kimball worked on the house. Restoration guided by Phillips and Buchanon has been progress since 1982. Recent research has led to the installation of historically correct paint and wall coverings, as well as to the recarving and installation of wood work that had been missing form the house since before 1870.

There were at least thirty outbuildings at Gunston Hall in the 18th century; none have survived. The present dependencies were constructed in the 1950s, with the exception of the kitchen which was rebuilt in 1990. The school house to the west of the house is an 18th century structure, originally located in Caroline County, Virginia. In addition to the dependencies, there were two slave quarters at Gunston Hall. A small family cemetery is about one quarter mile west of the house. A formal gardens on two levels is between the house and the river. With the exception of the English boxwood bordering the center alee, which date from about 1760, the garden was planted by the Garden Club of Virginia in the 1950s. The house and gardens have an expansive view of the Potomac River. Other buildings on the site include a museum building and visitors center, three houses for staff members, one barn, and other agricultural buildings.

Gunston Hall is a brick, one and one half story tall Georgian house. It is five bays wide by three bays deep. The structure is on a bluff above the Potomac River. Although the house is orientated towards the river, the main entrance is in the center bay on the land side (south façade) of the house. The main entrance features a panel door topped by a fan light and flanked by side lights. There is a small brick porch on the east end of the house, and a Gothic porch before the center bay on the river side (north) façade. Doors at the east and west ends of the house provide access to the cellar. All corners have sandstone quoins. The first floor has a center hall plan, with a short passage placed between the two rooms to the east of the center hall. The second floor has a barracks floor plan, with a long east-west passage with four rooms to either side. There are four interior chimneys. All windows are nine-over-nine double hung sash. The first floor windows have interior shutters. The gable roof has five dormers on the north and south faces. The interior was designed by William Buckland, who worked at Gunston Hall for four years as an indentured servant.