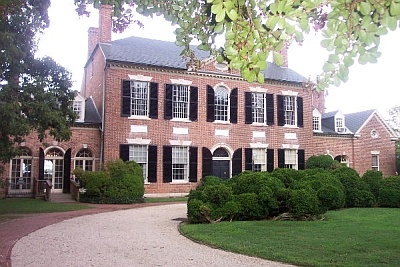 Part of Woodlawn’s significance lies in the story it reveals about the evolving history of historic preservation in the United States. It is clear that as early as the 1890s the site was considered an important historical landmark worthy of preservation and even a tourist attraction. Although owners in the early twentieth century altered the hyphens and wings, their changes demonstrate an effort to adapt the house to their lifestyle while maintaining a sense of this historical architectural character. Woodlawn is also nationally significant for its architecture as one of Dr. William Thornton’s surviving domestic designs. Woodlawn is closely associated with George Washington, both as Eleanor Lewis’ benefactor and adoptive father, and for the role it played it in the powerful iconic significance of Washington after his death. The 2000 acre estate was carved out of Mount Vernon, located on a site selected by Washington himself, designed by an architected that Washington selected, and paid for with funds Washington provided. Following the death of Major Lewis and the family's departure in 1839, Woodlawn stood abandoned for a number of years. In 1846 the Lewis family sold Woodlawn to Troth-Gillingham, a ship building company based in NJ, owned by Quakers determined to prove to southerners that one could run a successful business and farm without using slave labor. In 1848 the property was divided between the Troths and the Gillinghams , with the Troths retaining the mansion. In 1850 Paul Hillman Troth and his wife Hannah Maria sold Woodlawn to John and Rachel Mason, who were from Maine. The Masons were Baptists, and founding members of the Woodlawn Baptist Church. Their son, Otis Tufton Mason, provided the land for the construction of the church (see Inventory file for Woodlawn Baptist). Woodlawn was therefore the nucleus of two abolitionist religious communities. The Quaker and Baptist settlements conducted their business operations without slaves and offered schooling, farming and other opportunities to former slaves and free blacks. In 1892 Woodlawn passed out the of Mason family. Some of its later owners included playwright Paul Kester, Senator Oscar Underwood of Alabama, and Secretary of War Harry H. Woodring. In 1949, the Woodlawn Public Foundation purchased the mansion, opening it for tours on April 10 of that year. Through a leasing agreement, the National Trust for Historic Preservation assumed the administration of Woodlawn, its first museum property, in 1951. It was opened to the public on May 9, 1952. Ownership of Woodlawn was transferred to the Trust in 1956. (Much of the foregoing from a history written by Craig Tuminaro, Curator, in 2001.)

Of the buildings closest to the mansion, only the smokehouse to the north of the Mansion, and dairy, necessary, and archaeological remains of the icehouse on the south side presently exist. There are formal gardens to the southwest. To the northwest, the construction of new base housing on Fort Belvoir visually intrudes on the property. Woodlawn encompasses a 126 acre parcel of land, divided roughly in half by United States Route 1-Richmond Highway. The Woodlawn Mansion, situated atop Grey’s Hill, overlooks the Potomac River and Mount Vernon, three miles southeast. A tall clump of trees seen from Woodlawn's second story marks the site of Mount Vernon. Currently the site is accessed by a drive which enters through wooden gates near the north end of the property and U.S. Route 1.

Woodlawn is a five-part brick mansion with a central pavilion, flanking hyphens, and flanking side wings. Its outdated Georgian plan executed by a Federal-style architect during the Federal period may be due to the Lewis ownership. The house bears a striking resemblance to Kenmore, Lawrence Lewis' childhood home. He may well have influenced the final design. The central pavilion is a central hall, double-pile, two-story structure with four interior end chimneys and a jerkin-head roof. It is five-bay, with a central door, and the brick is laid in Flemish bond. Windows are twelve-over-twelve double-hung sash topped by Aquia sandstone jack arches with prominent keystones and are flanked by louvered blinds painted black. There are rectangular panels between the upper and lower windows. The central upstairs window on the land (northwest) side is arched, with decorative tracery in the top of the arch. On the river (southeast) side the central aperture is a door leading to a balcony above the entry door. The porch is tetrastyle, with Doric columns and a balustrade surrounding the flat roof. The entry doors on both elevations are topped by fanlights. Both elevations have decorative gables above the center bay, each with an oval window. To either side of the central pavilion is a one-and-a-half hyphen. Each hyphen has two dormer windows in the roof slope and three tall round-arched openings (windows or doors) on the lower level. Connected to each hyphen is a one-and-half story gable front wing with a single opening at the ground level and a circular window above. All cornices have dentils.