As bikeshare launches today in Reston and Tysons, Fairfax County officials point to the project as one way they are working to boost the economy.

The system gives people new ways to get around, helping create a sustainable, urban landscape. It also helps to spurs economic development for this same reason.

Not only do bikeshares attract talented people who help to fuel an innovation economy, but also they produce tangible economic benefits. 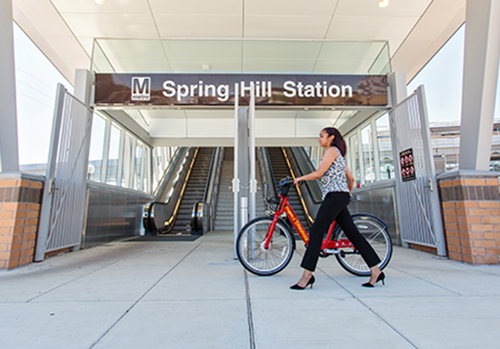 Biking is Increasingly How People Want to Get Around

Increasingly, everyone from millennials to boomers want to ditch their cars and get around on two wheels instead of four. This means that offering bikeshare is one way to draw—and keep—talented professionals in the county, officials say.

Millennials, who now make up the largest living generation in the country, want to live in urban areas that offer transportation options besides driving. The American Planning Association conducted a national poll two years ago that found that 50 percent want to live in an urban area, and 43 percent said that having an alternatives to the car is very important.

Bikeshare use is also rising, according to the APA’s survey. It found that 14 percent traveled by bike at least once a month, and 26 percent say they want this to be their primary travel method in the future.

In the DC region, bikeshare is an important amenity to millennials. American University’s Kogod School released a study this year that looked at what’s important to millennials living in the region. More than 40 percent said that being able to bike, walk or take transit was key.