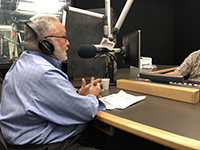 For obvious environmental and public health reasons, water used for bathing, laundry, washing dishes, cooking, flushing toilets, and industrial processes cannot be discharged into the environment before being treated. The challenge is to move wastewater safely from homes and businesses through neighborhoods to a treatment plant. This is where nutrients and pathogens are removed, and the water is disinfected and released back into a waterway. Usually this process happens undetected by residents. However, when blockages occur, daily life is disrupted by maintenance or repairs, or when odors escape pipes, residents become aware of the county’s sanitary sewer system.

Anyone who spends time on Fairfax County’s stream valley trails has probably had his/her nature experience interrupted by the strong odor of sewer gas at some point. The sudden shift from fragrant flowers and moist leaves to noxious sewer odors is an instant reminder that the county’s wild areas are crisscrossed with manmade infrastructure that supports more than 1.1 million people.

Stream valley parks located in floodplains escaped development because of topography and planning. The ribbons of green provide habitat, water quality benefits, and space for outdoor recreation. However, because streams are found at the lowest elevations, the natural corridors share space with the county’s sanitary sewer system. This vast network of underground pipes relies largely on gravity to convey wastewater from homes and businesses to treatment plants.

Candy cane-shaped vents and green-painted manholes can be seen along stream valley trails. Much like a faucet that leaks because of a corroded rubber washer, manhole gaskets need to be replaced periodically to keep sewer odors caused by the formation of hydrogen sulfide contained within the pipe system. To locate potential problems associated with aging pipes, staff from the county’s Department of Public Works and Environmental Services (DPWES) inspect more than 200 miles of pipe and pressure clean up to 500 miles of pipe every year. Defective sewer system components are repaired or replaced, and pipes are relined as necessary.

One sewer system area in which DPWES has been very active in recent years is the Holmes Run Stream Valley area surrounding Lake Barcroft in Mason District. The pipes in the community were installed in the 1940s, and development over the years has increased the amount of flow passing through them. Three of the four pump stations that receive wastewater from the pipe network into storage wells and push it through pressurized pipes around the lake have been rehabilitated and improved. Plans to rehabilitate a fourth station are in design phase, and construction is expected to begin in late 2020. The gravity-fed trunk line, or main sanitary sewer pipe, on the south side of the lake and below the dam have been relined. Odor control devices have been installed on several manholes, and the system is inspected frequently. Outreach teams have informed residents and business owners about the problems caused by disposing of fats, oils and grease (FOG) down the drain. Inspection of commercial establishments that may have discharged FOG have also ramped up. Yet, despite these efforts and millions of dollars spent renewing infrastructure, odor complaints have persisted.

In 2017, staff, vexed by the continued odors, tried something new. A temporary system was installed that injects calcium nitrate into the wet well at the Holmes Run pump station to reduce odors downstream. Simultaneously, staff initiated a comprehensive study to determine the source of the odor.

The area studied lies between Arlington Boulevard to the north and highway 395 to the south and has an estimated population of 55,000. The study area includes residential homes, four shopping areas, and 18 schools (12,000 students), all of which contribute to the 10.5 million gallons of wastewater flowing through the area each day. Odor complaint logs were reviewed, and 30 manholes were identified to monitor and test air samples.

Tracking down sources of wastewater odor is not easy. Hydrogen sulfide forms naturally as organic matter decomposes, which is plentiful in sewage. Test results vary depending on the time of day because more wastewater is generated during morning and evening hours when people are home. Higher levels of hydrogen sulfide are observed during the warmer months when conditions are ripe for the gas to form, which is also when people use the trails and are more likely to notice the odor. The gas corrodes sewer pipes and joints, and at high concentrations (much above what the human nose detects) the gas can be harmful to humans. Minimizing the creation and release of hydrogen sulfide is a public health responsibility.

After a year of testing, analysis and peer review, the study did not produce a smoking gun. No specific sources of hydrogen sulfide caused by improper inputs into the system from homes and businesses were identified. Hydrogen sulfide remains suspended in wastewater under a steady flow, but the gas can form in flat stretches of pipe where flow is reduced. The source of the gas remains elusive, but another round of testing is planned to try and determine why hydrogen sulfide levels are so high in the area.

Although the source of the hydrogen sulfide has not been discovered yet, the study concluded that the reason for the release of the gas and the source of the foul odor is gravity. Two trunk lines, or sewer mains, converge at the Lake Barcroft Dam. The pipe elevation drops 80 feet over a thousand-foot stretch before leveling out along the bottom of the stream valley floor. This steep plunge creates turbulence, which releases the gas, and the velocity of the wastewater flowing downhill pressurizes the pipes and forces the gas out of the downstream manholes. In some conditions, the force has been strong enough to dislodge manhole covers weighing as much as 50 pounds!

Due to the density of development and the steep terrain, excavating the pipes and reengineering the system is unlikely. Other options are being explored and implemented that limit excavation and disruption to neighbors. Possible solutions include removing sulfides from the wastewater above the dam, infrastructure additions, limiting groundwater intrusion into the system, and controlling the vapor release downstream of the dam.

Throughout the study period, a noticeable decline in odor complaints was observed. Staff determined that the temporary solution to inject calcium nitrate into the wastewater was working to reduce the odor problem. Based on this information, a permanent injection system will be included as part of the Holmes Run pump station rehabilitation project. In addition, more carbon filter odor cartridges may be added to manholes to help mitigate odors from escaping gas, and inspections and maintenance will continue.

The success of the injection system is good news, but it comes with a cost – approximately $5,000 per week during summer months when the system is used. Designing and constructing the permanent system will also add cost to the larger pump station project. In total, more than $15 million has been spent on improving the sanitary sewer system around Lake Barcroft and in the Holmes Run Stream Valley, and this is just one area of the county. There are several hot spots where odors are a nuisance, and the entire system – more than 3,200 miles of pipe and 63 pump stations – is aging. Also, more frequent extreme rain events are damaging pipes that cross streams and impacting sensitive biologic processes at the advanced wastewater treatment plant.

A high level of planning, monitoring, maintenance, and budgeting is required to convey and treat the county’s wastewater and to protect public health and the environment. DPWES continues to study the problem and implement sensible solutions to reduce sewer odors that negatively impact residents’ quality of life.

If wastewater is observed or sewer odors are present, please call the Wastewater Trouble Response Center at 703-323-1211.