You're Gonna Need an Ocean of Calamine Lotion...

It’s green (sometimes) and has three leaves. Those are the basics of poison ivy. To avoid it, you should know a little bit more about what it looks like and where it grows. Those who are allergic to poison ivy know that an encounter with it causes blisters, swelling, and extreme itching.

Poison ivy grows in non-cultivated sites, such as along stream banks, roadways, fields, and forests. It also can grow in your ornamental shrubs or perennial borders. Knowing how to identify and control it are the best defenses against accidental contact. 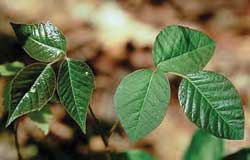 The best way to identify poison ivy (Rhus radicans) is by its compound leaf consisting of three pointed leaflets. The middle leaflet generally has a longer stalk than the two side ones. The leaflet edges can be smooth, toothed, or lobed. The leaflets are two to four inches long and positioned alternately on the stems. The leaves are reddish when they emerge in the spring, turn green during the summer, and become various shades of yellow, orange or red in the fall. The leaves are usually glossy. Yellowish-green flowers appear in June or July followed by light colored berries.

Poison ivy can be found in one of three forms: an erect woody shrub, a trailing shrub running along the ground, or a woody vine. The vine is usually seen growing on trees or other objects for support. It has aerial roots along the stem that give it the appearance of a fuzzy rope.

There are three methods that can be effective in eradicating poison ivy. They include hand pulling; severing the vine and then treating the regrowth with an herbicide; or applying an herbicide to individual leaflets.

Hand pulling is most successful when the soil is moist. Dig out the roots and pull them out in long pieces. Take care to remove the entire root because the plant can resprout from sections of root left in the ground. Avoid skin contact by wearing gloves while you work and washing clothing and gloves immediately after you finish. Rinse the washing machine thoroughly afterward to eliminate the possibility of contaminating other clothing.

Vines growing on trees can be difficult to pull out of the ground because their roots may be entangled with the tree’s roots. Sever the vine at the base and carefully pull it out of the tree. Apply an herbicide to the new shoots that will soon emerge from the base of the old plant. Herbicides are most effective if applied to actively growing foliage two weeks on either side of full bloom, in early summer.

Read the label of any herbicide to ensure that poison ivy is listed, and follow the manufacturer’s directions. When you find poison ivy in the midst of your ornamental plants, take special care when eliminating it so you avoid harming desirable plants.

The blistering rash caused by poison ivy is the direct result of contact with the oily toxicant known as “urushiol.” Urushiol is found throughout the plant, including the roots, stems, bark, leaflets and certain flower parts. The plant has to be crushed, broken, or in some way injured to release the substance. An injury to the plant may be as minor as an insect chewing on it.

Once urushiol is released, it can find its way to your skin by direct contact with the plant and then spread by touching other parts of the body. Because the sticky, oily substance is easily transmitted, you may come in contact with it indirectly from pet fur, garden gloves, tools, clothing, golf balls or other objects. Contrary to popular belief, the rash from poison ivy cannot be transmitted from touching the oozing blisters. The rash spreads by the urushiol, not as the result of contamination from sores. Breaking the blisters does not spread the rash to other parts of your body. But your wounds can become infected and you may make the scarring worse. In very extreme cases, a doctor may need to draw out excessive fluid. New red areas and blisters that appear a few days after the primary rash represent less sensitive areas or areas where less poison was deposited, not spreading of the poison.

If you know you have come in contact with poison ivy, wash the area as soon as possible with soap and cold water. Warm water may cause the urushiol to penetrate the skin faster. Because urushiol can penetrate in less than 15 minutes, you may still get a rash, but at least you will have contained the infected area. Most people develop symptoms within 24-48 hours after contact. The interval varies considerably because of individual sensitivity and the amount of poison contacting the skin. The first symptom of poisoning is a severe itching of the skin. Later, red inflammation and blistering of the skin occurs. In severe cases, oozing sores develop.

Although extremely irritating, most cases disappear in a seven to ten days. In the meantime, relief may be found from over-the-counter drugs such as Caladryl, Cortaid, Ivarest, Benedryl, and Aveeno Oatmeal Bath. A physician should examine severe rashes, especially those on the face or covering large areas of the body. There are many home remedies to relieve the itching such as soaking the affected areas in extremely hot water or swabbing diluted bleach to the blisters.

One additional caution is that people can contract a rash by exposure to smoke of burning poison ivy. Be careful not to burn wood with the poison ivy vine attached to it. Take extreme caution to avoid inhaling smoke or letting it come in contact with your skin or clothing.