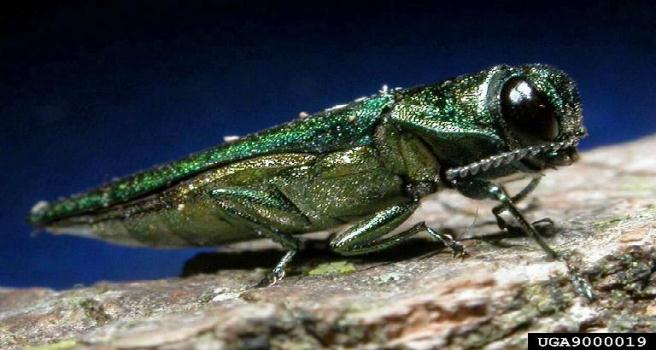 The green ash stretches majestically up to the sun, the leaves reaching over the stream bank.  Virginia bluebells and asters grow happily on the ground below. Pollinators perform their aerial acrobatics as they move from one plant to the next, and the cool stream water rushes along, hopping over the rocks and pebbles in its path.  Native ash trees (Fraxinus species) like this one are providers of food and habitat for countless creatures, including the grey ash sphinx moth, which depends on ash trees for its survival.

1. Identify your ash trees.
2. Look for signs of an emerald ash borer (EAB) infestation. Know that there are also other borers that often attack immature ash trees.
3. Not EAB infested? Consider preventive insecticide treatment in May or June.
4. EAB infested? First, report it. Then, determine how advanced the case is, and decide whether the tree is worth trying to save. Treat the tree or get it professionally removed.
5. Don’t move firewood. Uphold the quarantine.
6. Monitor your ash trees closely, and be on the lookout for purple glue traps in your area.

Ash trees have also been planted widely, lining streets and dotting yards, providing shade and a connection with the natural world, and livening up our neighborhoods with bright yellow colors in the fall. As if all that were not enough, this hardwood tree also happens to provide the preferred wood for the manufacturing of that quintessentially American object, the baseball bat. They are certainly trees worth saving.

Ash trees are facing a potentially devastating threat from the Emerald Ash Borer (EAB). The borer was first identified in 2002 in southeast Michigan, as ash trees throughout forests in that region were dying off precipitously. Its point of entry is thought to have been wooden shipping packing material.  Native to eastern Russia, northern China, Japan, and Korea, it rarely causes problems in its home environment.

In American ash trees, however, an infestation can be fatal within two years.  Tens of millions of ash trees have died nationwide, and the EAB has been found in two Canadian provinces and counties in twelve U.S. states – in the Midwest, the East Coast and the Mid-Atlantic region – including Fairfax County.

Because an unidentified infestation can turn fatal so quickly, it’s important to keep a close eye on the ash trees on your property and in your neighborhood. The first step in monitoring is to take an inventory of the Fraxinus species trees you have around. There are a number of ash tree lookalikes, so even if you’re familiar with ash trees, you may want to brush up on the details.  The branches are opposite, not alternate. They have compound leaves, with five to nine leaflets per leaf.  The leaves can have fine teeth or smooth edges, and twigs are gray to brown and do not have a waxy coating.

The white ash, Fraxinus americana, and green ash, Fraxinus pennsylvanica, are the two most commonly planted, but all Fraxinus species are at risk from the Emerald Ash Borer.  They can be difficult to tell apart, but often white ash is found in more moist upland sites and green ash in wet forests or floodplains.  There are also the rarer black ash, F. nigra, which has seven to eleven leaflets per leaf, and Fraxinus caroliniana, which has many common names, including Swamp Ash and Water Ash.

The closest lookalike is the box elder, which also has opposite twigs and buds and compound leaves.  However, the twigs are green to purplish brown and often have a waxy coating, the leaflets have coarse or no teeth, and there are only three to five leaflets per leaf.  Other trees that can throw you off track include the mountain ash (not in the Fraxinus genus, and thus not affected by the Emerald Ash Borer), black walnut, elm and hickory.

There are a few online guides available, including one which will not only help you identify ash trees, but also the lookalikes.  It is available at www.emeraldashborer.info/files/E2892Ash1.pdf.

The Emerald Ash Borer adult, Agrilus planipennis, is a half inch long, bright metallic green, with an elongated, flattened back.  Its abdominal segments, beneath the wing covers, are purple.  The larva is creamy white and legless with bell-shaped body segments.

The adult Emerald Ash Borer is present from late May to August, feeding on the leaves of ash trees but causing very little damage to the tree itself.  During that time, it will fly between one half and two miles at a time, find a mate, and lay its reddish-brown eggs on the surface, in crevices, or just under the surface of the bark of an ash tree.  In two to three weeks, the eggs hatch, and the larvae come out.  It is the Emerald Ash Borer larvae that cause the bulk of the damage to ash trees.  They burrow into and feed on the inner bark from August to October, preventing water and nutrients from circulating to the higher branches.  The larvae overwinter in the tree until spring, when they undergo pupation and emerge as adults.

Can You Spot the Emerald Ash Borer In A Lineup?

E
See the answers at the bottom of the page.

Infestations of the Emerald Ash Borer can be difficult to spot, particularly early on, but there are signs to look for.  The larvae leave distinct D-shaped exit holes (3 mm or 1/8th inch diameter) and S-shaped larvae channels packed with sawdust under the bark.  Bark splitting and increased woodpecker activity on an ash tree also could be indicators of the larvae beneath the bark.  A very visible sign is canopy die back – when the upper leaves start to wither and die because they aren’t getting nourishment.  A resulting sign can be a burst of new branches and leaf growth along major branches, the trunk or at the tree base, also known as epicormic shoots, as the tree tries to recover lost leaf growth.

Be aware that ash trees in their teens will often decline after being attacked by many types of borer and will have similar patterns of die back.  If you have an ash tree of this size, try to identify the D-shaped holes indicative of the Emerald Ash Borer before reporting it.

If you find that you have ash trees on your property that have signs of an emerald ash borer infestation, the first thing to do is pick up the phone.  In Fairfax County, you can report the suspected borer sighting to the Forest Pest Branch of the Fairfax County government at 703-324-5304. (Note: In Arlington, call the Virginia Cooperative Extension at 703-228-6423 or -6400. Elsewhere in VA, call the Virginia Department of Agriculture and Consumer Services at 804-786-3515.)

Once you’ve reported what you’ve found, you have more investigating to do and there are decisions to be made.  If it is a relatively new infestation, you can try to save the tree.  Because a recent infestation is hard to spot, many trees are not found until it is too late, and the best option in those cases is to have a certified arborist take down the tree and dispose of it safely.  Forestry experts counsel that if an ash tree has lost more than 50 percent of its leaves in an EAB infestation, the tree does not have a good chance of surviving.  Don’t let indecision paralyze you – if you have found evidence of Emerald Ash Borer, the worst possible outcome is if you do nothing.

In 2008, the USDA and state of Virginia placed a quarantine on all hardwood firewood, ash nursery stock, wood chips and roundwood in Northern Virginia. No ash trees or wood can be moved out, but there is free movement of plants and wood within the area. For those who scoff at regulation, be forewarned that the quarantine has some serious teeth: up to a $2,500 fine from Virginia, and up to a $250,000 fine from the federal government. The original infestation in Fairfax County was due to a Michigan nursery violating a similar quarantine order. If you’re anticipating going somewhere, buy your firewood once you reach your destination. Not only will you prevent spreading the borer, save ash trees, and stay out of trouble with the law, you will also support the local economy of the place you are visiting! There is no sustainable firewood certification process, but try asking the seller directly about their sustainability practices. For guidelines on buying firewood, see www.dof.virginia.gov/mgt/firewood.htm, and for insiders’ tips on identifying sustainable firewood, see www.woodheat.org/environment/environment.html. "

An Emerald Ash Borer infestation can also be prevented with proper treatment of trees. For smaller trees with a diameter at breast height, or DBH, of 15 inches or less, there are specialized insecticides designed for homeowners at your local garden stores.  The systemic insecticide ingredient to look for is imidacloprid.  The product is combined with water and the mix is used to drench the soil around the tree.  Be sure to follow the instructions carefully.  Be aware too that imidacloprid treatments can result in mite infestations and you may have to treat your trees with a miteicide a few weeks later.

For larger trees, you will need to contact certified arborists, who have more options available to them to protect your ash tree.  They can use a systemic insecticide, applied as a soil injection or drench, a trunk injection, a bark spray on the lower trunk, or a protective cover spray on the trunk, main branches, and sometimes even the foliage.  When making decisions about the appropriate course of action for your ash trees, keep in mind that most of the insecticide treatments will need to be reapplied each year and can become costly.

Preserving the Ash Tree for the Future

A coalition of researchers, extension agents, educators, and state and federal governments are taking steps to prevent further contamination.  Strict quarantine orders have been put in place in all of Northern Virginia and in other affected areas, particularly targeting firewood (see box above).  The Emerald Ash Borer, its life cycle, its place in its native ecosystem, and how future areas could be infested are also all being studied in search of biological solutions to the problem.

Here in Fairfax County, you will find that we, too, are doing our part.  In a collaboration between the VA Department of Forestry, the Forest Service, and Fairfax County Forest Pest Section, purple sticky traps have been distributed in areas near where infestations have been found.  (Emerald Ash Borers have been shown to prefer the color purple.)  If you see one, know that these devices are coated in natural plant oils and are non-toxic.  Furthermore, they do not attract the EAB to areas previously free of the insect.  The insect counts will be used to track the incidence and spread of the borer.  If you find that a purple sticky box has fallen down, do not attempt to touch or move it, as the glue is very strong.  Instead, please report the information to the Fairfax County Forest Pest Branch at 703-324-5304, TTY 711. 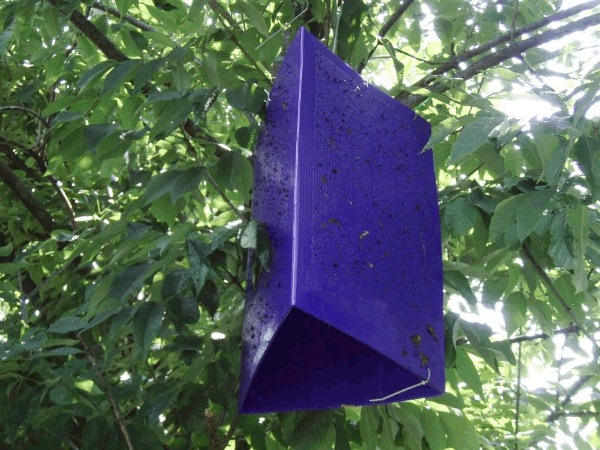 A project has also begun to collect native ash tree seeds to preserve biodiversity.  Most of the efforts are focused on areas that are being hit hard by the Emerald Ash Borer, including Michigan and other Great Lakes states.  The seeds will be stored at the National Seed Laboratory in Dry Branch, Georgia.  For more information, visit www.nsl.fs.fed.us/ or http://nrs.fs.fed.us/disturbance/invasive_species/eab/control_management/seed_collection/.

It may seem ironic that such a tiny insect can kill a mighty tree, but this is not the first time something like this has happened. The American Chestnut was once one of the most important forest trees in its range, but was destroyed by a fungal blight in the first decades of the twentieth century, and even today has been unable to make a comeback. As Northern Virginia residents, we have a unique opportunity to help control the spread of this vicious bug, by careful monitoring, observation, and action.  The very fate of our ash trees may be at stake.

Answers from Can You Spot the Emerald Ash Borer In A Lineup?