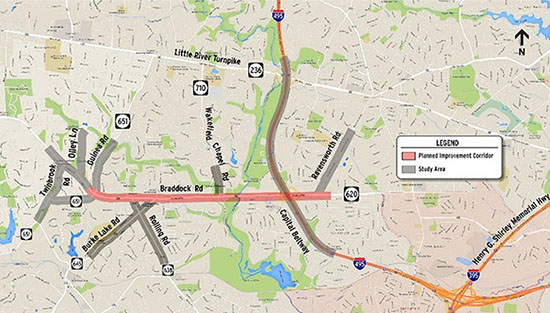 Fairfax County is working with Braddock District Supervisor John Cook and members of the community to develop and evaluate a number of improvements for the Braddock Road corridor, between Guinea Road and I-495. Potential improvements may include additional travel lanes, HOV (high occupancy vehicle) lanes, or intersection, pedestrian and bicycle improvements.

Here are the selected alternative plans:

The first community meeting on the Braddock Road Overpasses was held on June 20, 7 p.m., in the Lake Braddock Secondary School Cafeteria.

Residents who attend the meeting can learn about and comment on the proposed pedestrian crossings, the designs being considered, and possible locations for additional crossings. Please contact Supervisor Cook's office by email or call 703-425-9300 with any questions.

The next stage of Braddock Road Multimodal Study project will be to move into final engineering design. Six workshops were held in Fall 2017 for community residents to discuss the improvements at specific sections of Braddock Road. All meetings are scheduled to begin at 7:30 p.m.

At the June 26, 2017, Community Meeting, Sup. Cook announced a survey regarding the development of a park-and-ride lot at the Kings Park Shopping Center. Survey feedback, along with the work of the tast force, helped shape the final plans for the project. These plans are available in maps of the Braddock Road corridor below.

In accordance with Title VI and ADA requirements, please contact the Fairfax County Department of Transportation at 703-877-5600, TTY 711 to request reasonable Title VI or ADA accommodations, including printed material in an alternate format or translated and interpreter services for public events. Requests for assistance at public events must be received at least 7 days in advance of the scheduled event.