Following two years of intense effort, on March 20 the Board of Supervisors approved a sweeping new land-use plan that supports walking, biking and a bus rapid transit system on Richmond Highway.

Called Embark Richmond Highway, the update to the 7.5-mile corridor’s land-use plan is the first step needed to build a future bus rapid transit, or BRT, system. The future bus rapid transit system will run primarily in the median from the Huntington Metro Station to Fort Belvoir. Eventually it will extend to the county border at the Occoquan River. Buses are expected to run every six to 10 minutes between the nine BRT stations planned along the corridor.

Overall, the plan calls for concentrating more mixed-use development, especially residential, within a half mile around the nine BRT stations. It also imagines new ways to get around, providing continuous walking and bike paths along the corridor in addition to the bus system.

New, interconnected park spaces are also planned along the corridor. The parks will be strategically located at each of the BRT stations and distributed throughout the station areas, providing places for people to enjoy the outdoors and learn more about the area’s history.

The plan also features two new, innovative concepts for open space called livability and ecological spines. These spines are continuous park spaces that are integrated with streets and buildings.

Ecological spines highlight the streams that were diverted into channels or underground tunnels before modern environmental regulations. Many of these currently hidden streams will be “daylighted,” incorporating them into the street design. These spines could offer boardwalks, seating, gathering areas, trails, fitness equipment and other recreation spaces, as well as help make connections to existing residential neighborhoods.

The Richmond Highway corridor is home to six community business centers, areas planned for future development. The plan concentrates most of the future growth into four of these centers: Penn Daw, Beacon/Groveton, Hybla Valley/Gum Springs and Woodlawn. The densest development will be focused in Beacon/Groveton and Hybla Valley, the locations for the two future Metro stations.

Today, the four centers are dominated by suburban retail and strip malls. Under the plan, they would be transformed into places with distinct characters and identities: 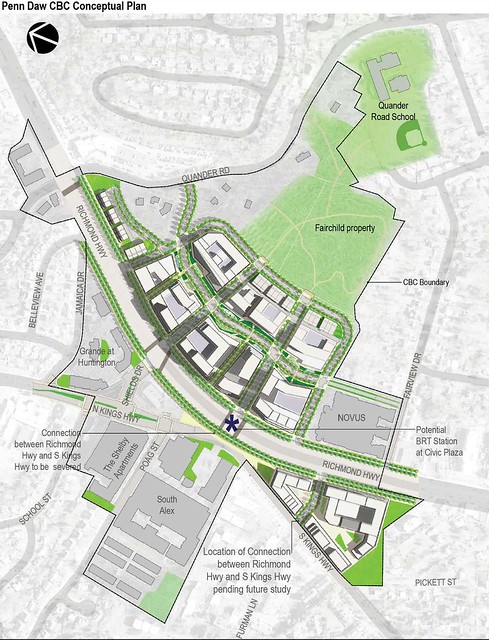 How We Got Here

The county began its efforts to update this plan in May 2015, following the Board of Supervisors’ authorization to look at land uses within half a mile of proposed BRT stations. The planning efforts were aided by a 13-member advisory group and six major community meetings and numerous neighborhood meetings over two years to help gather public feedback.