No-Till Agriculture: Good for the Soil and the Bottom Line

Advances in farming practices have brought about methods to control weed growth without relying on the plow. One of the most advanced and effective of these new methods is called no-till agriculture. As the name implies, no-till agriculture allows a farmer to plant the crop and control weeds without turning the soil. While traditional plowing is effective for weed control, it generally reduces a farm's long-term productivity by exposing the organic-matter-rich top soil to the surface and breaking up the clods that slowly and naturally form in soil.

A high organic matter content and good clod formation are both crucial aspects of fertile soil. Organic matter attracts and holds onto water, thus ensuring proper hydration for plant roots, even during dry periods. The slow breakdown of organic matter in the soil releases vital nutrients, such as nitrogen, phosphorous and potassium, that are essential for plant growth. Organic matter also causes the soil to clump into the tiny granules that are the basis of soil clods. When a soil clumps together into clods, large pore spaces form in the soil. These pores become conduits for water and air passing through the soil. Plant roots use a portion of this air and water. The remainder of the water slowly percolates through the soil and into the groundwater.

When soil is turned, the organic matter is exposed to the atmosphere and can quickly oxidize into carbon dioxide. This is bad for the soil and is thought to be an important emission source driving global warming. Less organic matter in the soil means less water retention, less nutrient release and less clod formation. Along with encouraging the oxidation of organic matter, plowing physically breaks up pre-existing clods and exposes them to the direct force of rainfall. The force exerted by rain drops is enough to break up the remaining clods and form a structureless soil “crust” on the field surface. This crust has virtually no pores and as a result, plant roots do not get the water and oxygen that they need, and surface runoff and soil erosion become a large problem. The crust can also be strong enough to make it difficult for seedlings to push through to the surface.

In no-till agriculture, the farmer uses a disk or chisel plow to prepare the field for seeding. Rather than turning the field, these plows create a narrow furrow, just large enough for the crop's seeds to be injected. Tractor attachments inject a band of fertilizer in with the seeds, thus negating the need to fertilize the whole field, and close up the furrow after the seed and fertilizer have been planted. With these new plows, the farm field can be seeded with minimal disturbance of the soil. 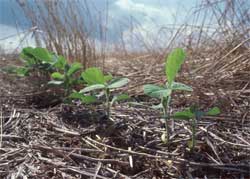 Advanced field management coupled with modern no-till plowing can actually increase the fertility of a farm's soil. The use of cover crops and green manures during the non-growing season are two popular forms of such field management. A cover crop is any sort of vegetation that is grown between commercial plantings. The cover crop holds the soil in place with its roots, preventing erosion. Cover crops also shade the soil, preventing fast-growing weeds from getting sunlight, and reduce organic matter oxidation by keeping the soil surface cool. Cover crops, like all plants, exude excess organic materials through their roots. These materials, along with leaves and other plant parts that fall to the soil surface, replenish the soil organic matter and provide food for beneficial soil microbes. In a highly fertilized field, cover crops will also take up much of the excess fertilizer that was not used by the commercial crop, minimizing nutrient leaching into ground and surface waters. 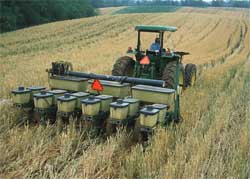 Green manures are any type of crop that is incorporated into the soil while still green or soon after flowering. In many cases, cover crops become green manures just before commercial planting resumes. Using mowers or flails, farmers cut and chop the cover crop and leave the residue on the field. In this way, the field is cleared for planting and all the organic matter in the cover crop is added to the soil. Inedible parts of commercial crops are frequently used as green manures, too. For instance, corn stalks contain a lot of organic matter and are often left on the fields as a green manure. Similar to cover crops, green manures can prevent erosion and act as thermal mulches. As long as the green manure is evenly spread across the field, it will protect the soil from the forces of wind and water, block the soil surface from the direct rays of the sun, and insulate the soil at night.

Research into cover crops and green manures indicates they may also lessen the farmer's dependence on expensive and environmentally damaging herbicides. Historically, a no-till farmer had to use herbicides before planting crops to kill any weeds or surviving cover crop plants. Recent experiments using different plant species as cover crops are helping scientists understand which plants perform best at weed suppression. Additional research is focusing on machines that will more efficiently mow down cover crops and distribute them across the field as a green manure. If the cover crop can prevent the emergence of all weeds, and new machinery can mulch up the entire cover crop, the need for herbicides will be greatly diminished.

The benefits of no-till farming are economic as well as environmental. The no-till farmer will see an increase in the organic matter of the soil, and a decrease in the amount of erosion. More organic matter and less erosion mean more fertility, less fertilizer, and higher yields. Additionally, with the advances in cover crops and green manures, the no-till farmer can greatly reduce the use of high-cost herbicides. Given the combined environmental and economic benefits of the practice, it is easy to see why no-till agriculture is catching on across Virginia and the country.