The powers of government are vested in an elected Board of Supervisors consisting of nine members elected by district, plus a Chairman elected at large.

Board members are elected for four-year terms. There is no legal limit to the number of terms a member can serve.

More about the Board of Supervisors

The County Executive's Office focuses on strategic planning, ensuring and valuing excellence in public service, fostering partnerships with our residents and community leaders, preparing the annual budget and executing all resolutions and orders of our elected Board of Supervisors.

How Our Budget is Built in Fairfax County

Who Represents You in Fairfax County

What Taxes Do We Pay in Fairfax County?

Stay Connected with Your County

County government responsibilities are shared across different departments and agencies, which provide many services you use every day:

County government responsibilities are shared across different departments and agencies, which provide many services you use every day: 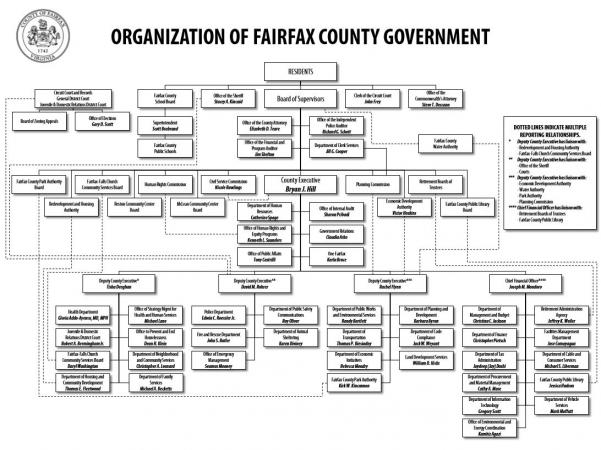 This doctrine of limited authority for local governments is commonly called the Dillon Rule, a name that is derived from the writings of John Forest Dillon, who served as a judge, a law professor and an author of legal textbooks in the latter part of the nineteenth century.

The Dillon Rule as a concept is found in all states – meaning that apart from the power ceded to the federal government in the U.S Constitution, the state governments have all the remaining governmental authority. However, most states have adopted various types of “home rule” provisions that permit some or all of their local governments to undertake those governmental functions that are not specifically precluded by the laws of those home rule states. Virginia has not provided such home rule authority to its local governments.

The Virginia Supreme Court and other Virginia courts routinely apply the Dillon Rule to determine whether or not a local government has the legal authority to undertake a disputed action. For well-established county functions, like planning, zoning, and taxation, there are a number of statutes that give the county clear direction and authority to act, but in new areas of governmental concern, the Dillon Rule can serve as a constraint to innovative governmental responses.

This means that Fairfax County has limited powers in areas such as raising revenue, and it cannot take certain actions without appropriate action from the state, which limits revenue diversification options among other things.