The CECAP Working Group set a series of ambitious but achievable greenhouse gas emission reduction goals for the Fairfax County community, which are outlined below. Some of the goals are target goals which specify a percentage emissions reduction the community aims to achieve by a certain date, in relation to a 2005 baseline. Other goals are sector-specific and pertain to the sectors of our economy and society that are most responsible for emissions in Fairfax County.

The overarching, long-term target goal of CECAP is for the Fairfax County community to achieve carbon neutrality by 2050, with 87 percent of the necessary emission reductions coming from local sources and actions, as opposed to the purchase of carbon offsets.

What Does It Mean To Be Carbon-Neutral?

For the purposes of CECAP, carbon neutrality means achieving net zero emissions by balancing greenhouse gases released in our community with an equivalent amount reduced or offset using carbon credits.

On the way to realizing carbon neutrality, the CECAP Working Group set two interim target year goals for the community:

Why have two interim goals?

The interim goals are all about keeping us on track and helping the community to benchmark our progress on the way to carbon neutrality by 2050. The 2030 interim goal aligns with the Intergovernmental Panel on Climate Change's (IPCC) findings regarding the importance of keeping global temperature increases below 1.5 degrees Celsius.

The 2040 interim goal aligns with our 2050 carbon neutrality goal. All three of the target year goals are illustrated in the graph below, which is also available on page 28 of the final CECAP report. 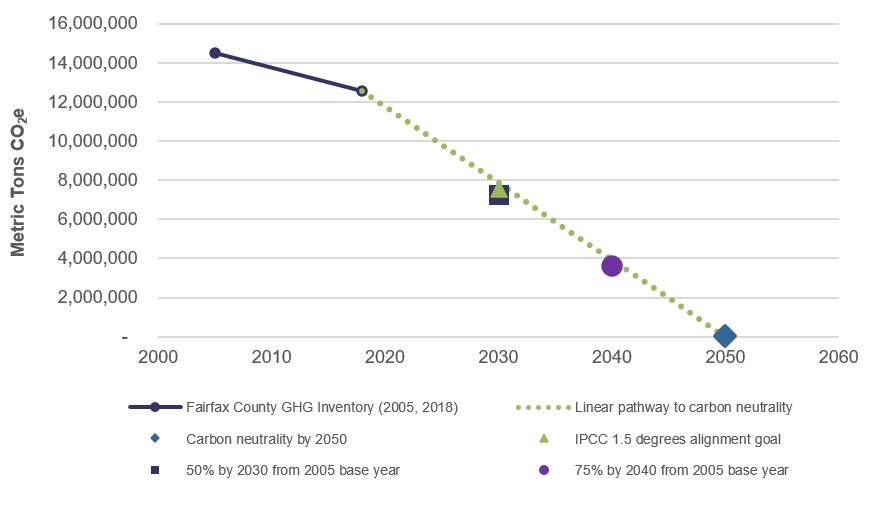 In addition to target year goals, the Working Group selected a series of sector-specific goals to further guide the actions of the community as we work toward carbon neutrality. The goals are listed below.

Each of the sector-specific goals addresses an area where we can make a real impact on our local greenhouse gas emissions. The two top sources of greenhouse gases in Fairfax County are energy use in buildings, both residential and commercial (49 percent of all emissions), and transportation, like cars and trucks on our roads (44 percent of all emissions). It's no wonder four of the six sector-specific goals relate to these two areas of focus.