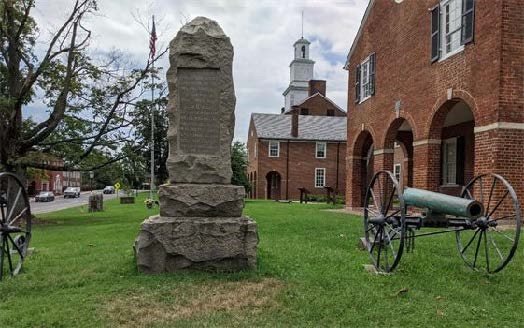 The granite Marr Monument, installed at the courthouse in 1904, is dedicated to Capt. John Marr, the first Confederate soldier killed in combat. On either side of the monument are two howitzers, which were installed in 1910. A Virginia Department of Historic Resources “First Confederate Officer Killed” memorial marker is also located on the courthouse complex grounds. All three will be removed following the board’s action Tuesday.

“In Fairfax County, our diversity is one of our greatest qualities and Confederate monuments don’t reflect our values. We cannot ignore what these monuments mean for our residents. Symbols matter. I was glad to vote to change course and remove divisive celebratory monuments and chart a more positive path forward.”

Legislation passed by the Virginia General Assembly during the 2020 session gave Virginia localities broader authority over war memorials and monuments. Previously, cities and counties were not permitted to modify or remove them. Virginia is home to more than 220 public memorials to the Confederacy.

The Marr monument, howitzers and their carriages will be removed to a county storage facility. According to the Virginia Code amendments, the county must offer such monuments or memorials for relocation and placement to any museum, historical society, government or military battlefield for a period of 30 days. After the 30-day period has expired, the Board has the sole authority to determine the final disposition of all publicly owned monuments or memorials.