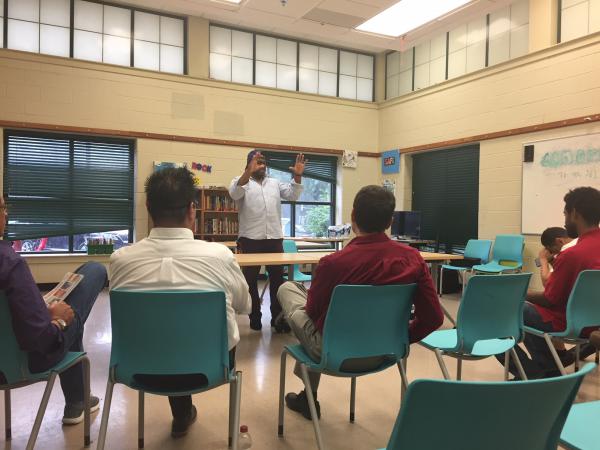 On a stormy Monday in early August, participants in the Father Engagement Unit’s summer Dads’ Parenting Group class learned a final lesson about being fathers, ate their usual man-sized meal, and then received their graduation certificates.

The participants, a graduate-turned-volunteer, and class co-facilitators Bennie Herron and Calvin Robertson of the Department of Family Services’ Father Engagement Unit kicked off their final session by sharing how they had practiced self-care since the previous class.

One dad saw Beyonce and Jay-Z in their On the Run II concert. Another got some much-needed rest.

“I broke up with my girlfriend,” a third dad said quietly. “It was necessary.”

This act of self-care garnered the most discussion. His fellow dads commiserated and offered words of support. It’s clear they’ve grown close during the 12-week program in Reston’s Southgate Community Center.

Over a lasagna dinner, the discussion turned to lessons the dads have learned from the program and from each other.

“I’ve learned that my day job is the easy job,” a dad said. “Parenting is the hard job. It’s no joke!”

Most of the heads in the room nodded in agreement.

Though one class participant joked, “Just give me my certificate,” the fathers seemed a little reluctant to leave. They’ve shared a lot over these 12 weeks; they’ve felt comfortable opening up and being vulnerable. It’s a sacred and safe space. And like the Las Vegas slogan, what’s said here stays here.

But the knowledge part of the program is over. It’s time to put what they’ve learned into practice.

As the first bars of “Pomp and Circumstance” began to play in the background, Robertson and Herron reminded the men how far they’ve come since the class first started.

“Remember the tools in your parenting toolbox,” Robertson said, “and how you didn’t know what they were for back in our first class.”

“Now you know what they’re for and how to use them,” Robertson said. “But remember: Parenting doesn’t stop. It’s 24/7. It’s for a lifetime.”

With that, Herron handed out the graduation certificates. Several participants said they would keep Herron and Robertson on speed dial.

Then the graduates wafted out of the center, and with them, the summer Dads’ Parenting Group class came to an end.

The next 12-session Dads’ Parenting Group starts Sept. 12, 2018, at Westlawn Elementary School in Falls Church. The class is free, but registration is required.