The Board of Supervisors discussed funding for these new projects at their Feb. 12 Environmental Committee meeting. It is anticipated that the board will approve the money in March as part its third quarter review of the county’s current budget.

These projects put into action the county’s ambitious Operational Energy Strategy that was adopted last year. This strategy aims to cut energy use in county buildings by 20 percent per square foot over the next 10 years. The overall strategy moves forward Fairfax County’s commitment to cut greenhouse gas emissions.

As part of the energy strategy, county leaders previously approved $4.5 million in September to install LED lighting at 19 facilities, including libraries, community centers, the animal shelter and parks. Retrofiting incandescent and fluorescent bulbs with LEDs should be completed late this year.

As a new project, the county is looking to replace the approximately 56,000 streetlights in the county with LEDs. Because Dominion Energy installs, owns, operates and maintains virtually all of these streetlights, the county must pay to convert them. However, Fairfax led the negotiations this past summer for a new regional agreement with the utility that lowered the conversion costs. 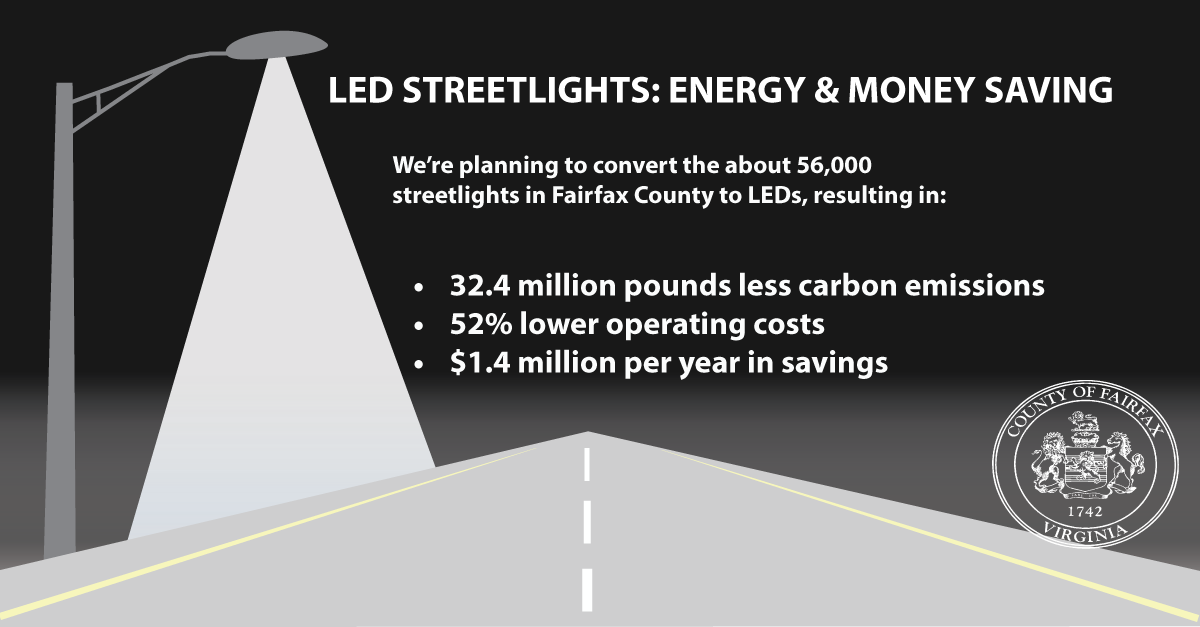 The total cost to change streetlights to LEDs is an estimated $9 million, and county officials are considering a phased conversion over five years. To begin the first phase, $1.8 million will be required.

The change will yield both financial and environmental benefits. LEDs will cut operating costs for these streetlights by 52 percent, generating an estimated annual savings of $1.4 million once the conversions are complete.

LED streetlights will also cut 32.4 million pounds of carbon emissions every year. This is equal to the greenhouse gas emissions from 1,760 homes for a year or 1,653,696 gallons of gasoline burned.

As another energy efficiency measure, the county proposes installing electric vehicle charging stations at up to 20 county facilities phased over two consecutive years, such as its office buildings, community centers, libraries, RECenters and commuter parking lots. The stations would service county vehicles, but also would be available to the public for a fee.

The total cost for designing, permitting and building the EV charging stations is $1.5 million over two years. To build the first set of stations, the county would allocate $750,000. The county will contract with a private company to own, operate and maintain these stations.

When fully implemented, the Operational Energy Strategy is expected to lower greenhouse gas emissions by 533,000 metric tons compared to today. This is equal to the amount of climate-warming gases that would be released from burning 1.24 million barrels of oil or 584 million pounds of coal. 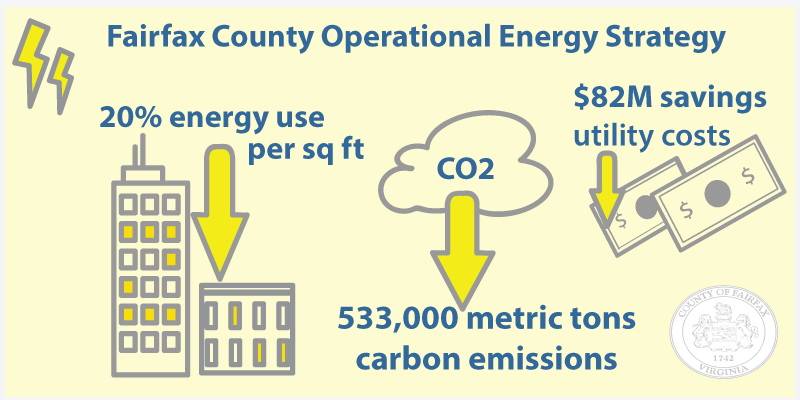 The $2.5 million proposed for the streetlight conversions and EV charging stations makes up some of the $48 million investment called for by the strategy. However, the strategy’s energy saving projects will pay for themselves over 10 years, generating an estimated $80 million in utility cost avoidance.