Fairfax County Commits to Carbon Neutral Energy Use By 2040 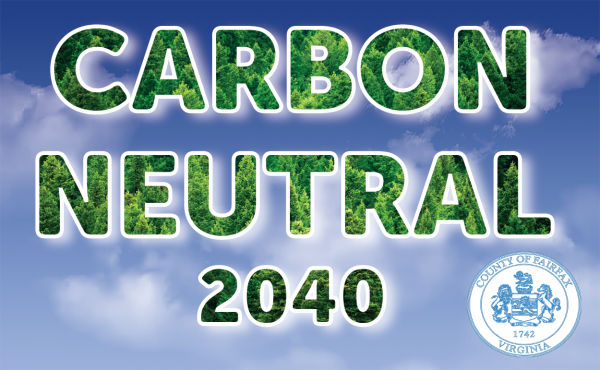 Fairfax County committed today to become carbon neutral by 2040 in its energy use for government operations, including buildings, facilities and transportation.

To achieve this transformative goal, the Board of Supervisors adopted an updated Operational Energy Strategy on Tuesday. In concert, they issued a formal declaration, dubbed “Carbon Neutral Counties,” that also encourages other local governments to take action to halt climate change.

To become carbon neutral, the county pledged to meet specific targets to reduce energy use, generate or buy green energy and shift its fleet to non-carbon emitting buses and vehicles. These targets include:

“This commitment to carbon neutrality is a critical step to slow climate change, and it extends our long -standing commitment to reducing our greenhouse gas emissions,” said Board of Supervisors Chairman Jeff McKay. “As we confront this existential challenge, we all must act with a true sense of urgency, and this is just one of the steps that the county is taking to meet this global crisis head on.”

“Climate change is a global concern, but it must be addressed at the local level if we are going to make real progress in reducing greenhouse gas emissions,” said Supervisor Daniel Storck. “The Carbon Neutral Counties declaration formalizes our commitment to responsible, sustainable county operations, and encourages other counties to do the same. The power of this declaration lies in its potential to serve as a roadmap for others, to create real forward momentum.”

Currently, there is no organized alliance for U.S. counties dedicated to carbon neutrality, although some have independently made their own public pledges. The new declaration creates an opportunity for counties to formally join together in this goal.

Fairfax County’s move to carbon neutrality resulted from the work by its Joint Environmental Task Force which was created by the Board of Supervisors and School Board. The group’s final report laid out the transformational goal to become carbon neutral by 2040, along with supporting recommendations on energy, transportation, waste management and recycling and workforce development.

The School Board is anticipated to consider these carbon neutrality goals at its July 15 meeting.

“The actions adopted today are additional steps forward in our joint effort with the School Board to reach the goals supported by the community,” said Mason District Supervisor Penny Gross who sat on the task force’s executive board.

While the task force included two representatives each from the Board of Supervisors and School Board, the majority of the group’s 13 members were county residents. It was created to engage the community on how the county and schools can work collaboratively to take on climate change and environmental sustainability.

For more information, visit the Fairfax County Office of Environmental and Energy Coordination.

The Fairfax County Board of Supervisors has committed to becoming carbon neutral by 2040 in its energy use for government operations, and it issued a Carbon Neutral Counties Declaration to encourage other local governments to join the fight to halt climate change.