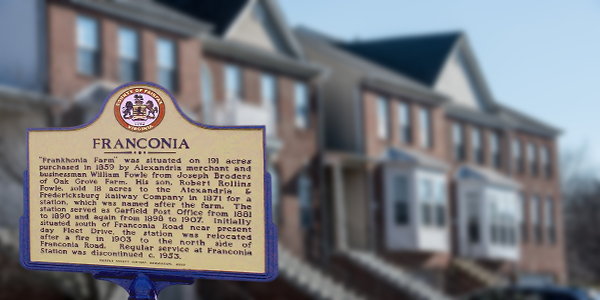 The Fairfax County Board of Supervisors officially renamed the Lee District as the Franconia District on Dec. 6. The board adopted the new name following a public hearing at its meeting today. The change is effective immediately, and other county facilities also will be renamed.

“Today’s action is an important statement about our values as a community,” said Board of Supervisors Chairman Jeffrey C. McKay. “We can’t change our history, but we can decide what in our history is worth celebrating and what is worth learning from to always do better. Franconia is a recognizable, richly diverse area, an area I have been proud to have lived in my entire life. This new name ensures our county continues to be a welcoming community to all people."

“Franconia has been central to the district’s identity for decades, and the name is synonymous with the community,” said Franconia District Supervisor Rodney Lusk. “During our three renaming town halls, it was clear that the overwhelming majority of participants supported changing the name to Franconia. From the Franconia Governmental Center, Franconia Road, to the Franconia-Springfield Metro, the new name celebrates a place, not a person. Thank you to the hundreds of constituents that contacted my office or participated in this year-long process. I look forward to beginning this new chapter in our community,”

While there is no conclusive historical evidence that the district was named after General Robert E. Lee, many residents perceived that it commemorated one of the most recognizable figures in Confederate history.

Other county facilities and districts that will be renamed include the:

The move to change the district’s name began when Supervisor Lusk launched a community conversation town hall on the potential renaming last March. The renaming process continued through the county’s legally required redistricting effort. After the Redistricting Advisory Committee’s work to recommend new maps for county electoral districts, the board reappointed the group this January to consider which districts should be renamed. The committee suggested that the Board of Supervisors consider a “community driven process that evaluates the names of magisterial districts and precincts to bring greater equity to bear in Fairfax County.” The committee also recommended that the Lee District be changed, although the group was not tasked with coming up with new names.