Redistricting Committee to Recommend Renaming Board of Supervisors Districts 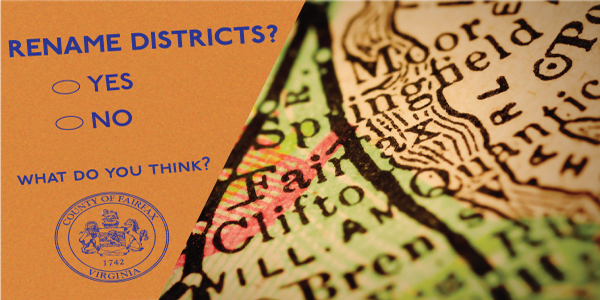 Fairfax County may rename its local election districts for the Board of Supervisors and School Board.

In new effort just begun in mid-January, the Redistricting Advisory Committee will review these names with a focus on social and racial equity, as tasked by the Board of Supervisors. The committee will make its recommendations by March 1 on any districts that should be renamed — but the group will not propose any new names.

Ultimately, the Board of Supervisors will decide if they will rename any districts, as well as determine the public process for choosing new names.

The committee is using seven criteria to determine if names warrant evaluation and discussion. These criteria include if a name is:

At their Jan. 18 meeting, the group selected the following districts for further consideration using their criteria:

The are nine districts that are currently named:

Some of these names were first established in 1870 and other names were picked later in the 20th century, according to a research report by the Fairfax County Public Library’s Virginia Room.

The committee wants input from residents, civic groups, businesses and others. The public is invited to provide their feedback on districts they think should or shouldn’t be renamed, express their agreement or disagreement or explain any community or economic impacts resulting from renaming.

There are three easy ways to offer input: