TMSAMS focuses on transit, bicycle, and pedestrian improvements to the Metrorail Stations in Tysons. 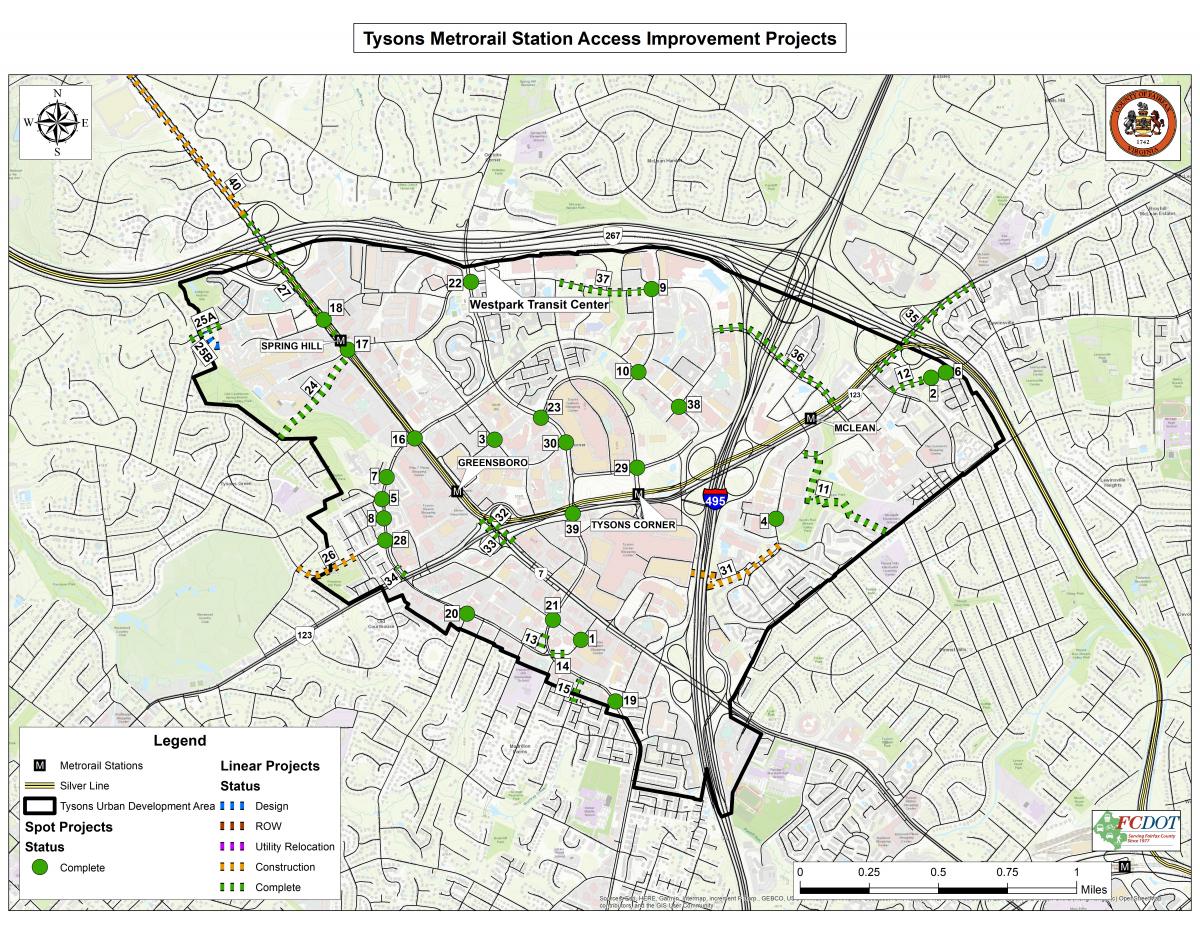 In the map above, each number corresponds with a project that can be found in the following tabs:

The Wiehle Avenue/Reston Parkway Station Access Management Plan, completed in April of 2008, identified necessary transportation improvements to enhance multimodal access to and from the future Wiehle Avenue and Reston Parkway Metrorail Stations. The finalized plan was so well received that the Board of Supervisors requested a similar study be completed for the four rail stations currently under construction in Tysons Corner.

In June 2010, the Fairfax County Board of Supervisors (BOS) adopted a new Comprehensive Plan for Tysons Corner to take advantage of the arrival of Metrorail service to Tysons and transform the area from the auto-oriented, suburban development pattern that exists today into a true urban downtown for Fairfax County. The Tysons Plan calls for a walkable, pedestrian and bicycle friendly Tysons that will eventually be home to 100,000 residents and 200,000 workers. While the Tysons Plan outlines a long-term vision for Tysons, it does not provide a multimodal access management plan to address near term access to the Metrorail stations in Tysons Corner.

In order to create a multimodal access management plan for the Metrorail stations, currently under construction, in Tysons Corner, as well as to get the public to begin thinking about how they will reach the stations, the BOS approved funding for the Tysons Metrorail Station Access Management Study (TMSAMS) project on June 1, 2009. The ultimate objective of the study was to create a document that can be used as a tool for the BOS to make funding decisions on multi-modal transportation improvement projects, specifically to access the Metrorail stations in Tysons Corner, as funding becomes available.

After this extensive public involvement process was complete, The Perspectives Group compiled the results of the input collected and produced the TMSAMS Final Report, including summaries from all areas of the outreach effort. Section 6 of the report highlights the top ranked bus transit, pedestrian and bicycle facility improvement recommendations, specifically improving access to the four new rail stations, from Comprehensive Plan for the Tysons Corner Urban Center, the Fairfax County Transit Development Plan, the Tysons Corner Sidewalk Analysis and the Tysons Corner Bicycle Master Plan. A final public meeting, with over 95 people in attendance, was held on October 4th, 2011 to present the findings of the TMSAMS public outreach effort.

Also included in this report are recommendations from the TMSAMS Advisory Group for additional improvements, additional analysis and increased use of technological innovations to address transportation related issues not covered by the FCDOT studies that were incorporated into the TMSAMS effort. As previously stated, the ultimate objective of this study is to create a document that can be used as a tool for the Fairfax County Board of Supervisors (BOS) to make funding decisions on multi-modal transportation improvement projects, to access the Metrorail stations in Tysons Corner. In order to reach this objective, FCDOT staff conducted a thorough assessment of the priorities and recommendations contained in the TMSAMS Final Report and developed the "FCDOT Staff Recommend List of TMSAMS Projects and Associated Cost Estimates" document as well as the "Staff Responses to TMSAMS Advisory Group Recommendations" document. These documents were approved by the BOS during their May 22nd, 2012 meeting and are available using the links at the top of this page.