Funding Identified for Board Priorities in FY22 Carryover Budget Package 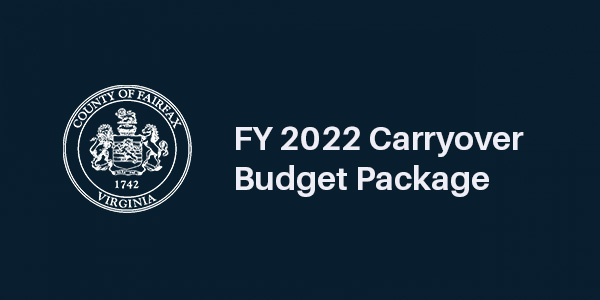 The FY 2022 Carryover Budget Package was presented to the Board of Supervisors at their meeting on Tuesday, Aug. 2, including a $199.61 million General Fund balance, with recommendations for allocating $190.05 million of the funding and an additional $9.56 million available for the board’s consideration. A public hearing and vote on the package is scheduled for Tuesday, Oct. 11.

Carryover is the process by which unspent or unencumbered funds for commitments to pay for goods and services at the end of one fiscal year are reappropriated to the next fiscal year. The Carryover Package may also include funding for one-time items approved by the Board of Supervisors that are not included in the Adopted Budget.

The FY 2022 Carryover balance is the result of continuing close management of agency spending and prolonged vacancy levels, along with higher than anticipated revenues.

“Projecting revenues during FY 2022 continued to be a challenge as many of the county’s revenue streams recovered, while others were still negatively impacted by the effects of the pandemic,” wrote County Executive Bryan Hill in his memo to the board.

Recommendations include a major boost for pedestrian and bicycle access initiatives, with $25.21 million set aside for those efforts. Combined with the $5 million allocated during the FY 2022 Mid-Year Review, total funding of $30.21 million of the $100 million target for these initiatives has been allocated.

In addition, $37.81 million is allocated to the Capital Sinking Fund, of which just over $17 million is designated for facilities management; $9.45 million for Fairfax County Public Schools; and $5.67 million for Parks.

These allocations are in line with the recommendations of the Joint Capital Improvement Committee, which included increasing the percentage allocated to the Capital Sinking Fund at year-end from 20 percent to 30 percent and including Fairfax County Public Schools in the funding allocation.

Investments in Board Priorities

An additional $3.5 million is recommended to support an expanded childcare center at the original Mount Vernon High School redevelopment project and $2.5 million is included for initial funding to establish the Tysons Anchor Organization, a new nonprofit community organization “to serve as a catalyst for the transformation of Tysons into an inclusive, vibrant and globally attractive urban center.”

Along with the $5.67 million allocated for Parks through the Capital Sinking Fund, the Carryover package includes a recommended $5.56 million in funding to bolster Parks capital construction and maintenance. Of the total, $5 million is designated to help bridge funding gaps until the next Parks bond referendum and address project cost escalations.

The remainder is set aside for the replacement of capital equipment and for invasive species clean up and improvements at Justice Park, which serves a densely populated area that also has some of the highest socioeconomic needs in the county.

Additional General Fund adjustments recommended as part of the package include funding to accommodate inflationary pressures on county operations, new positions including those necessary to staff the new South County Animal Shelter and investments for county IT needs.