A Note from the Executive Director - Retiree Cost-of-Living

Just last week we learned that the Consumer Price Index (CPI) for the Washington-Arlington-Alexandria region increased by 1.6 percent for the year ended March 31, 2019. For our over 9,000 retirees in our three retirement systems this is very important, as it establishes what they will receive as a cost-of-living (COLA) increase in July.

If you are one of our retirees or beneficiaries, I realize that this increase may not be as much as you would like or need to cover your increasing expenses. I am sorry if that is the case, and wish we could offer more. But we are limited by what is defined in the County Code for each of our three systems. The Code specifies that the increase that you receive in your July retiree pay each year is equal to the increase in the CPI-U for the Washington DC area from March of the prior year to March of the current year. For this year, the CPI increased by 1.6 percent from March of 2018 to March of 2019, so the retiree COLA for July will be 1.6 percent. Ultimately this portion of the Codes, as well as all other provisions spelled out in them, are meant to ensure that there is enough money available to pay all current and future Fairfax retirees exactly what they are owed and for as long as they live. 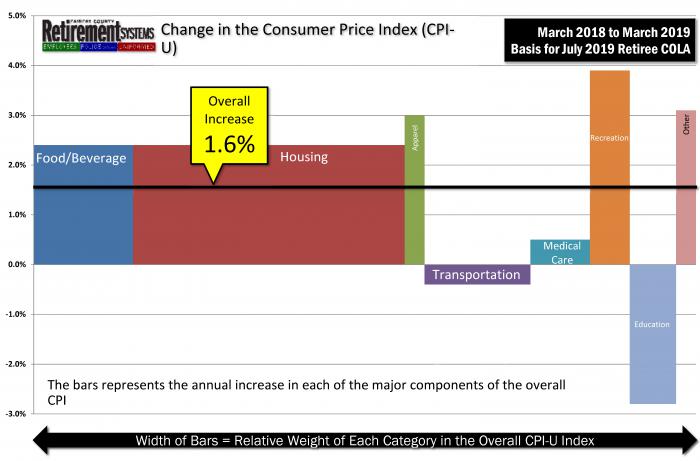 The chart on the right shows both the overall increase in the CPI (1.6%), and also shows the increases in the eight major categories of expenditures included in the CPI 'market basket.' The width of the bars represents how much each category is as a percentage of the total CPI. Thus Housing is the largest category, followed by Food/Beverage, and so on. Two categories, namely,Transportation and Education, actually went down during this March to March period. The other six categories increased between 1/2 of a percent and just under 4 percent. These are based on averages for everyone in the overall population.

There is no specific CPI indicator or 'market basket' available to measure cost increases experienced by retirees and other older individuals. From what I hear from you, our retirees, I am well aware that medical care is a larger share of your overall costs than 7.5 percent as reflected in this CPI. And for our retirees, it is also possibly increasing at a greater rate than medical costs for the overall population.

One great advantage that you have; as members of either the Fairfax Employees,' Police or Uniformed Retirement Systems, is that you have a defined benefit that will pay you for as long as you live. Many retirees do not have such a pension and must rely on savings, IRAs, 401s, or other assets to fund their post employment lives. Furthermore, your Fairfax retirement systems are strong, provide great benefits, have strong support and funding from the Board of Supervisors, and are lead by three amazing and dedicated Boards of Trustees.

I hope that this helps explain how your retiree COLAs are determined, even if the amount is not as much as you might have hoped for. I would love to hear from you regarding this or anything else related to your retirement. You can reach me by clicking this link.