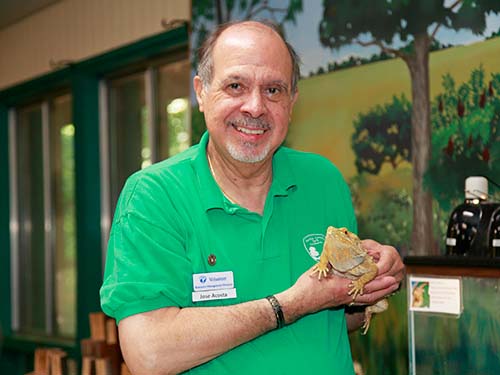 José Acosta was not a newcomer to Fairfax County when he decided to visit Hidden Oaks Nature Center. “I had driven by the center for years, but never stopped to explore,” he says. So, in early 2018, just after his retirement from the federal government as an information systems design manager, that’s exactly what José did.

Hidden Oaks Nature Center is nestled inside the Annandale District Park. There are live animals, exhibits, a pond, creeks, woodland trails, gardens, play areas, a resource library, and a rain garden. “I was truly impressed with the center,” says José. “It felt good to be there.” As he was leaving, he noticed a sign asking for help—he immediately signed up to be an animal care volunteer.

Training was required, but he didn’t mind. “I have an undergraduate degree in biology, so, obviously, I am interested in science and like to learn,” says José.

His assignment included all aspects of animal care from making salads, to feeding crickets, worms, and fish to various critters.  “It’s not as easy as you think,” says José. According to Avery Gunther, Hidden Oaks Nature Center naturalist, Jose´ really likes caring for the snakes, turtles, hamsters, and bearded dragon. “He knows each animal’s personality and quirks,” she laughs.

José is also the “volunteer on duty” every other Saturday. This position greets visitors, monitors the use of the center, and helps with whatever is needed. “I like showing off the center and telling visitors about its rich environment,” he says. “Greeting people sets the tone for their visit.”

As a bonus to his regular duties, José gets to assist staff when they are presenting animal programs. José says that it is fun to help with the live programs, and “I get to see the excitement of the visitors which makes me proud of our center and its animals.” 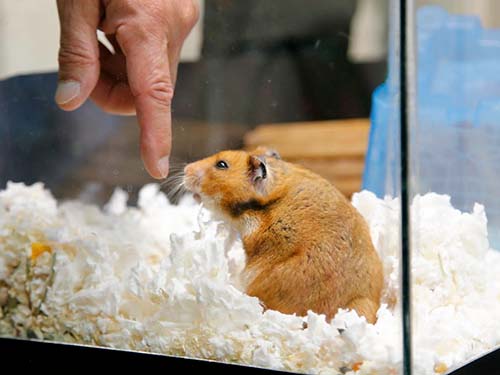 According to Gunther, seven months into the pandemic, when volunteers were once again permitted, José was the first one back. “It was something I wanted to do,” José states, and “I knew that the staff and animals needed me.” He also says that he was vaccinated and figured that by following masking and social distancing mandates by the county, everyone would be safe. “It was so good to have José back to help with 17 tanks of critters,” she says. Then, according to Gunter, he offered to take on more hours when a fellow volunteer was out for two months. “He is such a valuable member of our team!”

Amazingly, José doesn’t own a pet. “Growing up I had pets, including dogs, guinea pigs, chickens, rabbits, hermit crabs, and fish, in Puerto Rico,” he says. “I had a turtle and fish in Madrid, Spain, where my family lived while my father was stationed there in the Air Force.”

José credits his niece for his renewed interest in animals. “She worked as a veterinary assistant and at the St. Augustine Alligator Farm.” Jose mentions that his niece also has a Florida venomous animal certification and was in the National Geographic Snakes Underworld television special handling a large cobra!

While he may not be handling a cobra, he does handle nonvenomous snakes but...there is a painted turtle that he enjoys. Apparently, it splashes water everywhere when waiting to be fed. “Each animal is unique which makes them interesting and fun, and they all need to be cared for to survive at the center.” 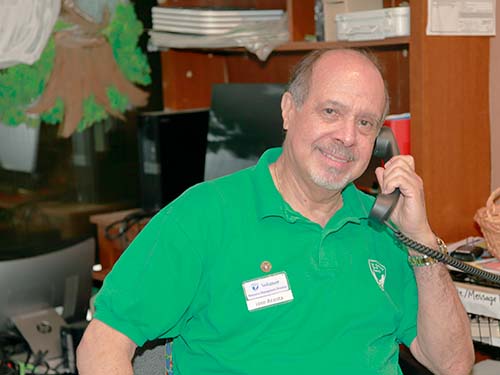 José gets satisfaction in volunteering for the community. He says that he also enjoys helping older adults with IT and other technology problems with RSVP Northern Virginia, a part of AmeriCorps Seniors. He even refurbishes old computers, tablets and cell phones for Computer CORE, a Falls Church non-profit organization that prepares underserved adults with foundational digital and professional skills. “I have the background and resources to help people, so why not?” he simply states.

José is a recent recipient of the Elly Doyle Park Service Award presented by the Fairfax County Park Authority. This award is given to those making a significant contribution to parks and their volunteer activities. “José has provided critical service with his exceptional care for Hidden Oaks Center’s exhibit animals when volunteers were limited due to COVID-19,” says Avery. “We are so glad that Jose Acosta is a member of the Hidden Oaks Nature Center animal caretaker staff!”

(Thank you to Shirl Walley for providing the photos.)