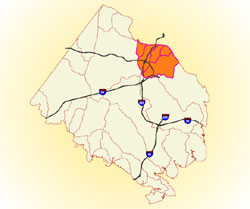 Unique Features
Tysons Corner and McLean are in this watershed.  It is crossed by major highways such as Leesburg Pike, I-495, Route 123 and the George Washington Parkway. The headwaters of Bull Neck Run, Dead Run, Pimmit Run, Scotts Run and Turkey Run are located adjacent to, in or near Tysons Corner.

The Middle Potomac Watershed Management Plan was adopted by the Fairfax County Board of Supervisors on May 5, 2008.