The Beulah Road Walkway project provides safe pedestrian access along Beulah Road between Meadowlark Botanical Gardens Regional Park and the Town of Vienna. The project is part of Phase I of the Northern Vienna (NoVi) Trail Network and is based on their feasibility study:

Segment B: Walkway on north side of Clarks Crossing Road from Hawthorne Ridge Court to the west side of Beulah Road to Beulah/Trap/Old Courthouse Roads (Four Corners) intersection, including crosswalk on Beulah Road and on Trap Road

The total project length of proposed walkway (Segments A, B and C) is approximately 4,000 feet. (Vicinity Map)

The project consisted of constructing a six foot wide asphalt walkway along Beulah Road and Clarks Crossing Road, except where a five foot wide concrete sidewalk between Chestnut Farm Drive and Clarks Crossing Road was constructed. This also included improving pedestrian access at intersections by adding marked crosswalks. Drainage improvements were also included with this project. 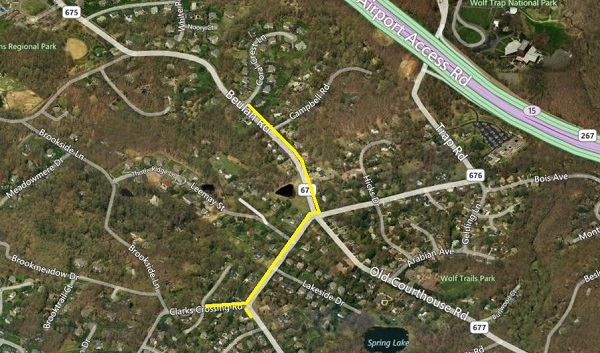 This project is part of the Fairfax County's Second Four-Year Transportation Plan endorsed by the Board of Supervisors on October 15, 2007 funded by the 2007 Transportation Bond Referendum. A community meeting was held on June 9, 2010, to present the project design and obtain feedback. Construction completed on this project in the fall of 2016.