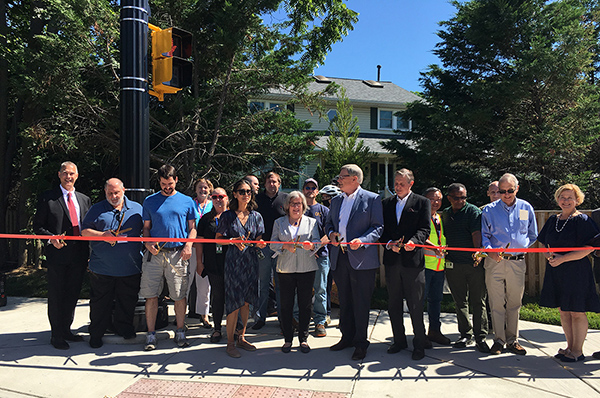 This project was completed in January 2021. The sidewalks along Great Falls Street and N. West Street are in use and the community celebrated the completion with a ribbon cutting ceremony on June 17.

Hearing from the Community

After public outreach in 2016, the County determined that the sidewalk on the east side is the best solution to improve pedestrian access in the area. Pre-final plans were submitted to VDOT for review in July 2017. The project will require utility relocations, right of way acquisitions and tree removal.

The construction contract for Great Falls Street and North West Street sidewalks was awarded October 28, 2019. Notice to proceed was given to the Contractor in January 2020. Completion is anticipated in January 2021.

The initial scope for this project was to provide a sidewalk on the east side of Great Falls Street. Based on feedback received at the community meeting on March 30, 2016, the County also evaluated locating the sidewalk on the west side of the street between North West Street and Woodland Drive. Attendees had the opportunity to ask questions and provide input to help determine a preferred alternative. The comment period for this project closed on Oct. 7, 2016.

The southern terminus of this project tied in with another proposed sidewalk on North West Street, with curb and gutter to be consistent with existing walkways along Great Falls Street.

This project completed a missing sidewalk link on the north side of North West Street to connect the residential neighborhood between Great Falls Street and Brilyn Place. The project constructed about 300 linear feet of six foot concrete sidewalk with curb and gutter on North West Street.

The project was identified as part of Fairfax County’s 2014 Transportation Bond. The majority of the project fell within the existing VDOT Right of Way but some additional Right of Way acquisition was required. Several large trees along North West Street were removed and utility relocations were required. The County coordinated with the City of Falls Church to install handicap ramps and crosswalks at the intersection of North West Street and Great Falls Street, which is located within the City.

Pre-final plans were submitted to VDOT for review in February 2017. Construction began in 2018.

Current project cost estimate is $350,000. Click on the image below to expand the map.

For more information on traffic signal improvements with this project, visit the City of Falls Church Department of Public Works page.

FCDOT ensures nondiscrimination in all programs and activities in accordance with Title VI of the Civil Rights Act of 1964 and the Americans with Disabilities Act (ADA). If you need this information in an alternate format or would like to request reasonable accommodations for persons with disabilities or limited English proficiency, contact FCDOT at 703-877-5600, TTY 711. Requests for assistance must be received at least 7 business days in advance of an event.