Public health officials in Northern Virginia are launching a region-wide tuberculosis awareness campaign, hoping to dispel myths and address barriers to testing and early treatment for those most at risk for TB.

The new campaign will use a combination of grassroots outreach, along with print, transit and digital advertising across Fairfax, Arlington, Loudoun, Prince William and Alexandria health districts. The advertisements are scheduled to run from now through April 14, 2019.

“While significant progress has been made toward controlling and curing TB, it remains one of the most common infectious diseases worldwide and is still a public health problem in Northern Virginia,” Fairfax County Health Director Dr. Gloria Addo-Ayensu said. “We want our communities to know that it’s a disease that can be prevented and cured.” 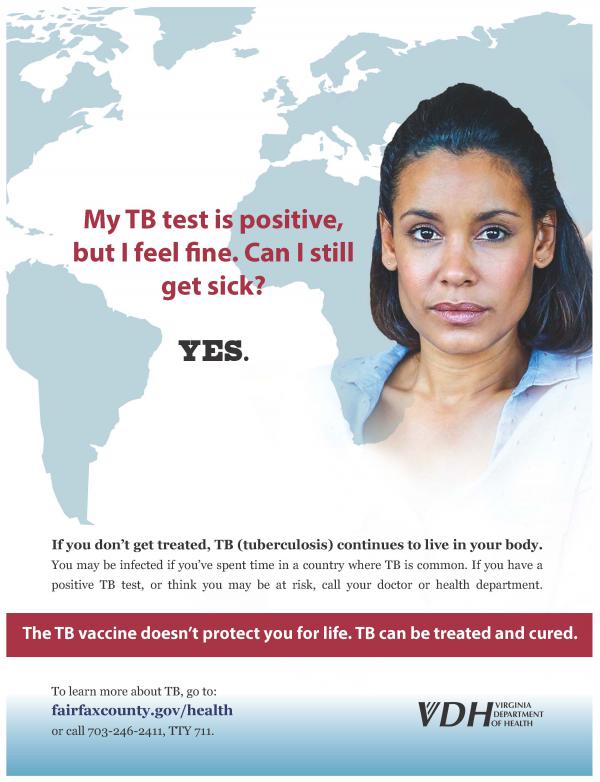 TB is a disease, caused by bacteria, that can spread from one person to another. Most often TB affects the lungs, but you can find it in any part of the body. TB spreads through the air when someone who is sick with TB disease of the lungs or throat coughs, speaks or laughs; people who are nearby can breathe TB germs into their lungs and become infected.

About one-third of the world’s population has latent TB infection, which means that they have been infected by the TB bacteria but do not feel sick or have any symptoms and cannot spread the bacteria to others. Without treatment, these individuals are at risk of becoming ill with active TB disease, which is contagious.

In 2017, there were 2.4 cases of TB per 100,000 people in Virginia. However, the rate was more than double in Fairfax County. Nine out of every 10 cases of TB in Virginia occur in people who were born outside of the United States.

Working with leaders from different ethnic communities and the marketing firm Campbell & Company Communications, the NOVA TB Task Force created public service announcements which include important messages, such as:

“Too often people fail to get treated for latent TB infection or ignore the symptoms of active TB disease,” said Dr. Barbara Andrino, Tuberculosis Physician. “People with active TB can infect up to 15 other people through close contact over the course of a year.”

“That’s why it’s so important that people get tested and take all the medicine the doctor prescribes for TB infection.”

For more information about TB in Fairfax, visit https://www.fairfaxcounty.gov/health/tuberculosis or call 703-246-2433, TTY 711.