CONTACT INFORMATION: Our office is open 8AM-4:30PM M-F. For your convenience, our office accepts walk-ins for intake from 9 a.m. - 2 p.m on MWF. 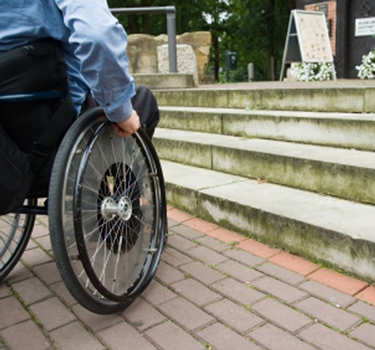 also occurs when a physical barrier or other obstruction makes services inaccessible to someone who has a physical disability.

For the denial of services to be illegal discrimination, it must be based on someone’s race; color; sex; national origin; marital status; religion; handicap or disability; the use, handling or training of a guide or support animal for disability; or relationship to a person with a disability.

It is important to know that it is also illegal to discriminate against someone because they have opposed illegal discrimination, filed a complaint, or assisted in an investigation. This is called retaliation, and the law protects those who oppose illegal behavior.

Examples of Discrimination in Public Accommodations

Here are just a few situations that may be illegal discrimination in public accommodations:

What is a public accommodation?

Generally speaking, public accommodations include most (but not all) business or buildings that are open to or offer services to the general public. Under the Ordinance, a public accommodation means and includes every business, professional or commercial enterprise, hospital or nursing home, refreshment, entertainment, sports, recreation or transportation facility located in the County, whether licensed or not, non-government entities, whose goods, services, facilities, privileges, advantages or accommodations are extended, offered, sold or otherwise made available in any manner to the public. Federal anti-discrimination laws also prohibit discrimination against certain protected groups by government-owned facilities or in the provision of government operated services, programs, or activities. Public accommodation does not include a bona fide private club or other establishments not in fact open to the public.

To file a complaint please complete the online questionnaire. For more information about discrimination in places of public accommodation or accessibility contact the OHREP at 703.324.2953, 711 TTY.

The ADA - Americans with Disabilities Act

Get Basic Facts about the ADA

Read the County’s Notice Under the ADA

Before filing a charge, make sure the Fairfax County Office of Human Rights and Equity Programs has jurisdiction to accept your complaint. The Assessment System asks general questions about your claims of discrimination and will assist in determining if OHREP is the correct agency to assist you.

After answering the questions you will be directed to the appropriate Intake Questionnaire with more specific questions about your allegations.