The Judicial Complex is a 47.8 acre portion of Fairfax County surrounded by the City of Fairfax. A new Master Plan for the complex was completed in January 2021 and included an assessment of priority county uses for the site, including future criminal justice, public safety and human services’ needs, as well as coordination with the City of Fairfax and George Mason University. The new Master Plan provides the County with a 20-year road map for future growth and development of the site.

Based on the recommendations in the Master Plan, the following projects are currently underway:

In 1969 Fairfax County opened the 13-story Massey Building, as the main seat of the Fairfax County Government. Extraordinary population growth through the 1970s and ‘80s dictated a new building for the seat of government and in 1992, the county offices moved to the Government Center campus, approximately four miles to the west. The Massey Building then became headquarters to the Police and Fire & Rescue Departments. In 2017 both departments moved from the Massey to a new Public Safety Headquarters building on the Government Center campus. The Massey building, at nearly the 50-year mark, reached the end of its usefulness as a structure.

Demolition of the Massey building provided the County with an opportunity to replan the Judicial Complex. The last comprehensive master plan for the site was developed in 2002 as part of the Courthouse Expansion and Renovation project. The goal of the master plan was to consider existing development needs, while keeping in mind and planning for future uses.

Major areas of consideration included the former Massey Building site, the Historic Courthouse, and existing surface parking lots. The disposition of other county-owned real estate assets within the City of Fairfax at and near the Judicial Complex location were also evaluated for opportunities, and the potential for public private partnerships redevelopment was assessed.

In January 2021, the Master Plan was completed, and funding was provided to begin implementation of the 20-year plan. The initial implementation projects include, Building One, Site Entitlement, and Historic Courthouse Wing Demolition. 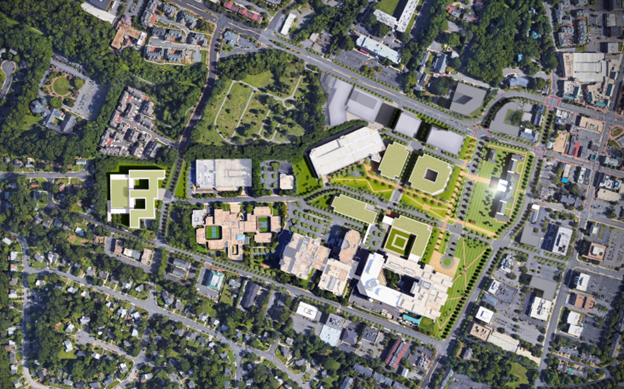 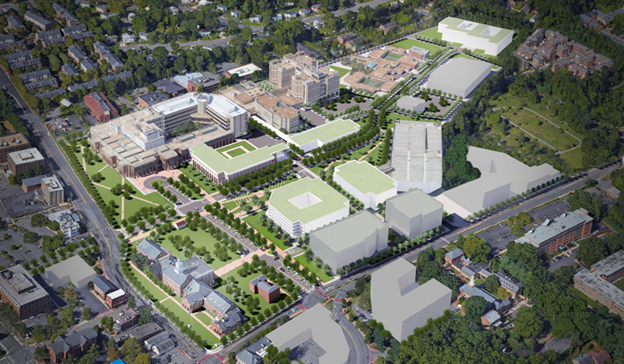 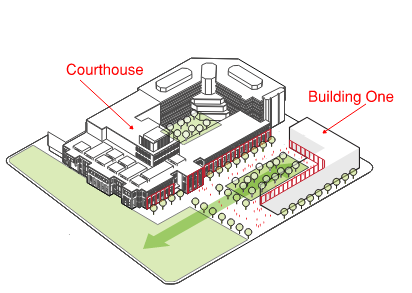 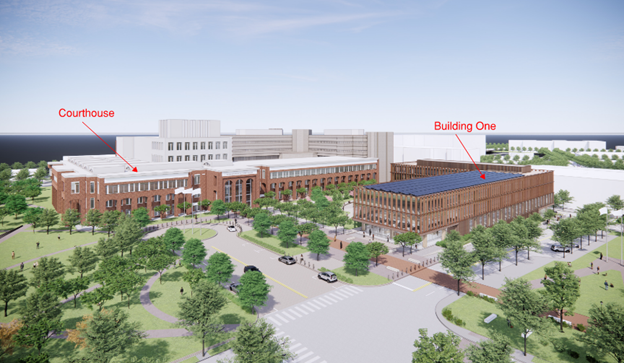 The current Comprehensive Plan for the Judicial Complex only allows for uses related to a Public Safety Center, including adult and juvenile detention, courts systems, and police and fire and rescue administration. A Comprehensive Plan Amendment will be needed to allow for residential and non-public safety/courts uses.

The demolition of the two 1950’s wings and sallyport at the rear of the Historic Courthouse building and restoration of the affected building, systems, and site areas as proposed in the Judicial Complex Master Plan.

HazMat and asbestos abatement to start in fall 2022 and demolition of the wings is scheduled to start in spring 2023 and be completed by spring 2024. 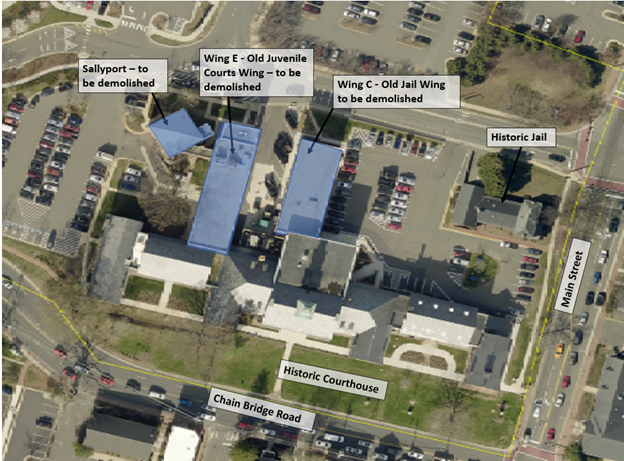 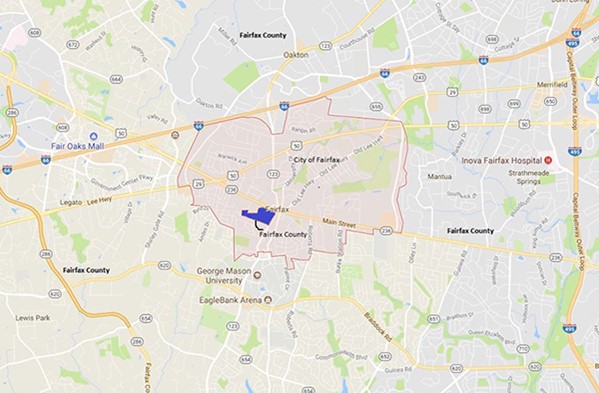 The property is located on the southwest corner of Chain Bridge Road and Main Street. It is a 47.8-acre piece of Fairfax County that is surrounded by the City of Fairfax and is assigned to the Providence District Supervisor’s Office. It is home to the Historic Fairfax Courthouse and Jail, the Historic Legato School, Fairfax County Courthouse, the Adult and Juvenile Detention Centers, as well as a number of non-profit and volunteer organizations.

Why is the Massey Complex an autonomous piece of Fairfax County surrounded by the City of Fairfax?
This anomaly dates back to 1799 when Richard Ratcliffe sold four acres to Fairfax County for the new location of the Fairfax County Courthouse. Mr. Ratcliffe owned all the land surrounding the four-acre parcel. He then proceeded to build a tavern where the Bank of America now sits. In 1800 he sold an additional six acres to the county to accommodate a jail, stocks, stable, and other associated buildings. It was then that he began to lay out the Town of Providence around the courthouse. The Town of Providence was approved by the Virginia General Assembly in 1805. This name was officially changed in 1874 to the Town of Fairfax and in 1961 became an independent city leaving a now 47.8-acre parcel of Fairfax County in the center of the city.

For questions about the project or to receive project updates by email, please contact Project Coordinators Gasim Elfaki at 703-324-2474 or Kim Callahan at 703-324-9451