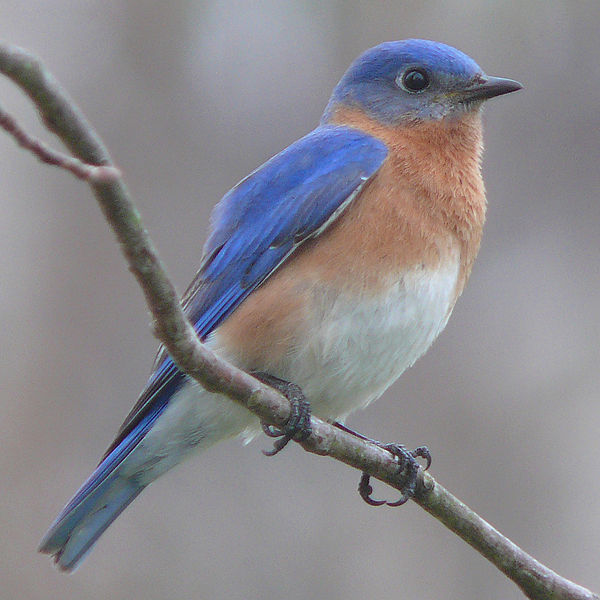 The bluebird is a longtime symbol of happiness, good health and hope in North America. Native Americans displayed the bird in their art and told tales of its beauty and humility in their folklore. They hung hollowed gourds over their refuse piles and meat drying areas to house the bluebirds, which would eat pesky bugs attracted to such places.

The first settlers were mesmerized by the birds’ brilliant color and sent back its feathers and skin to their royalty as a gift and representation of the wonders of the new world. Early American farmers built and hung boxes around the farm to encourage the presence of the bird that kept down insect populations harmful to crops.

In modern culture, the bluebird has made an appearance in “Zip-A-Dee-Doo-Dah,” the Disney Song and in the Wizard of Oz in “Somewhere Over the Rainbow.” The bird has inspired many, including Henry David Thoreau and Robert Frost. Given the bluebird’s place in our art and culture, it is hard to believe that it was once a threatened species.

When we think of the holiday season, the spirit of giving, being thankful for our many blessings, and getting together with family are the first things to come to mind. This year, you might consider adding another activity to your holiday schedule: the Christmas Bird Count. After all, there’s nothing like waking up early in the morning on a crisp wintery day with your ears, eyes and binoculars alert and ready to take in any sign of the birds that spend the season in the region!

People have been counting birds around Christmas-time for over 100 years and the data that comes back is invaluable. Scientists, researchers, and others use the numbers to look at the big picture of bird populations.

What kind of birds do you see in this area in the winter, you may ask? Just fly over to their website and check out the Washington, DC area current year or historical data to find all the species that have been found.

You can be of great help even if you’re not an experienced birder. You can be matched up with more experienced folks, and you’ll probably even learn a thing or two! There is a minimal $5 cost to help fund the program.

Groups meet all over the metro DC area, giving those interested a number of options for those with tricky schedules around the holidays. To find a group or start your own, see the program’s website at www.christmasbirdcount.org

The Eastern Bluebird has the scientific name of Sialia sialis, sialis being the Greek word for “kind of bird” as it was one of the first birds named by Carl Linnaeus (the father of our taxonomical naming system) in the mid-1700s. The bluebird is a songbird in the Turdidae or Thrush family, along with the American Robin, Wood Thrush and Veery. Thrushes are round, cup-nesting insectivores. The bluebird diet consists of 70% insects (grasshoppers, crickets, katydids, beetles), and 30% invertebrates (worms, sowbugs, snails) and berries (pokeberries, juniper, hackberries, blackberries). They are platform feeders, meaning they only eat on flat surfaces, not from traditional birdfeeders. Bluebirds are migratory birds; their range extends all the way to Canada in the warmer months and south to Central America in the colder months. In Virginia, they can be seen year-round and will overwinter in thickets.

From a conservation standpoint, one of the more interesting things about the bluebird is the fact that it is a secondary cavity nester. This means that it creates its nests in cavities, but is not strong enough to peck out its own holes and is therefore dependent on woodpeckers and other natural cavity creators.

From 1920-1970 there was a major decline in the bluebird population. The bluebird went from being as common as the robin, to being so rare that birders were sure of its inevitable extinction. There were many reasons for the decline, including loss of habitat, pesticide use, weather changes, snag (dead tree) removal, and an influx of house cats. However, the main reason for the population decline was the introduction of the House Sparrow and the European Starling into America, both cavity nesters, both extremely competitive and aggressive.

In 1978 the North American Bluebird Society (NABS) was formed by citizen scientists and birders concerned about the drastic decline in the bluebird population. They optimized bluebird boxes and set up a network of trails in which to put up boxes and monitor the numbers and health of the population. They educated the public and trained volunteers as monitors. The result is almost fairy-tale. The bluebird population rebounded and stabilized, escaping extinction. 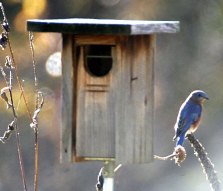 From March-August last year, I monitored the bluebird trail at Environmental Studies on the Piedmont, a private environmental research, education and conservation center. Located just outside Warrenton, it is 900+ acres in the foothills of the Blue Ridge with a range of habitats including ponds, wetlands, old and new growth forests, and open fields. The bluebird trail stretches for almost two miles and contains 36 boxes. It serves as a “model trail” in accordance with Virginia Bluebird Society recommendations. It has been well monitored and the data is submitted nationally every season.

The responsibility of a monitor is to open the boxes every week and fill out a data sheet including information such as species, nesting details, eggs (number/color), and fledgling age and health. The trail at Environmental Studies is evenly spread between three species common to nesting boxes across Virginia: the Carolina Chickadee, the Tree Swallow and, of course, the Eastern Bluebird.

Each species brings its own personality and joys. The chickadee has a leprechaun-esque nest made out of soft, green moss and the young are small and quiet. The swallow nest is a messy hodgepodge of goose feathers, straw and the occasional plastic; the babies chatter and rustle while the parents swoop down to scare away anyone who might approach. The bluebirds have a neat, deep-cupped nest made of grasses and straw where the shy mother lays blue eggs and watches over the box from afar. I could write a novel about the intricacies of these birds I watched and studied, but I prefer to simply encourage others to observe firsthand.

In the end, why am I doing this? Why set up boxes? Why monitor them? First, the case of the bluebird is a perfect example of a bottom-up, grassroots, successful conservation movement. Being a part of a movement like this and learning about its story is important at a time in our history when conservation (what it is and how to go about it) is a hot topic. 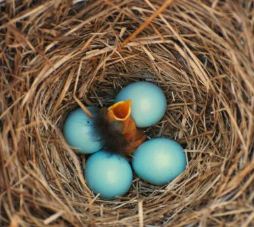 A second reason for taking part in bluebird monitoring and conservation is because the species has been so well-studied and documented. The continued monitoring of a species of which much is already known can provide data about other environmental shifts, including one contested issue, climate change. Scientists can use historical data about bluebird migration and breeding patterns to draw larger conclusions about climate and ecosystem changes.

A third reason to support bluebird conservation is that the bluebird is cute, fluffy and blue. This may sound flippant, but there is a deeper truth to it. Many conservationists forget that it is important to use figures or symbols that the general population can relate to, stand behind, and fight for. Conservation efforts for one species like the bluebird benefit others, including species considered by some to be “boring” like trees or insects. The bluebird, as an icon of happiness, is a perfect figure for conservation efforts. Those efforts can and will have a positive effect on the entire ecosystem.

On a final, more personal note, my main reason (and the reason I believe the most appealing to anyone interested in such pursuits) is because so much can be learned about life, death and everything in between. Observing the circle of life, from the first appearance of a carefully constructed nest, through to the blind, bald, utterly helpless babies, onto the clamoring, beautiful, young fledglings, to the abandoned, waste-filled nestbox, has truly brought about revelations. The first time I found baby bluebirds had died was hard, but the beauty of new life balanced the grief of lost life. For me the bluebirds will always stand for this joy of new life.

To have a better understanding of life, to be a better conservationist, scientist, citizen - or even a better person - go outside and connect with nature. Who knows, maybe a lucky bluebird will brighten your day. Happy Trails.