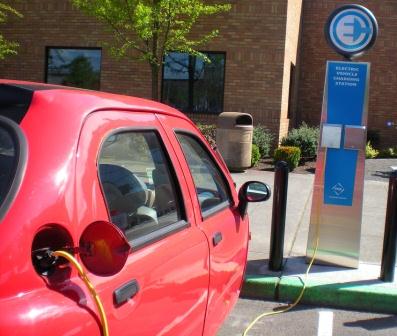 Each year, we see a new set of cars. While this normal cycle is familiar to us, this year we have seen some truly new vehicles on our roads. In December 2010, the Chevrolet Volt began arriving at homes in the Washington, DC metro area. Nissan rolled out their electric car, the Leaf, in the DC area in July 2011. Other car companies are closing in on producing electric models within the next couple of years as well. With the Volt earning Motor Trend’s Car of the Year award, the car world – and environmental world – is abuzz.

The benefits of using electric cars are widely heralded. The United States’ dependence on oil is linked to national security and it is also tied to climate change. Electric cars reduce carbon dioxide emissions, particularly if more of the nation’s electricity comes from renewable energy sources.

What Makes These Cars New?

This new wave of car technology is, of course, not entirely unprecedented. The Toyota Prius and Honda Civic gas-electric hybrids have been on the market in the United States for about ten years. The Chevrolet Volt and the Nissan Leaf, on the other hand, run purely on electricity. Well, sort of. The Volt has the capacity to drive about 40 miles using only electricity and then runs on gasoline (premium only) for an additional 375 miles, at 37 mpg. In comparison, the Leaf has an electricity-only range of 100 miles, but then must be recharged. In current models, air conditioning and heating use, as well as “heavy foot” accelerating, will diminish those ranges, in some cases significantly.

Other auto companies are jumping on the electric bandwagon. The 2011 Tesla Roadster can travel 200 miles on pure electric power, but costs about $110,000 compared to about $40,000 for the 2011 Volt or the $35,000 2012 Leaf. A $7,500 federal tax credit helps make the cars more affordable. By comparison, the 2011 model of the hybrid Toyota Prius is priced at just over $22,000. (Hybrid cars purchased after December 31, 2010 are no longer eligible for tax credits.) Other auto manufacturers including Ford, Toyota, and Mitsubishi are expected to introduce their own electric vehicles to U.S. markets within the next couple of years.

What happens when the battery runs out? Where will owners of the new electric vehicles charge their fancy high-yield batteries? Most will use at-home charging stations in their garages, essentially plugging into an electrical outlet, for Level I or II charging. Level I charging charges a car in about 12 hours using a regular 120 volt outlet, the equivalent of plugging it into the wall for the cost of about $1.50 day. However, older homes sometimes require new wiring dedicated to car-charging, or risk overloading existing circuits.

Another option is for owners to buy a 240V charging kit for Level II charging. These kits cost around $500, with installation fees ranging from $1,000 to $1,500. These kits could charge the Volt, for example, in as few as four hours. Fairfax County and other localities require a permit to install a charging station. For more information, contact the Dept. of Planning and Zoning at 703-222-0801, TTY 711.

Level III charging utilizes DC (direct current) unlike the alternating current (AC) in our homes. This technology is still being designed, but once on the market, most electric vehicles will charge in under an hour. They are able to partially charge 50-80% in 10-15 minutes. However, constant charging at Level III will lower the range of the car.

How Green Are Electric Cars?

Electric cars do not burn gasoline, so they do not generate harmful emissions at the tailpipe. However, the electricity must still be generated to charge electric vehicles. Currently, the United States obtains about 50% of its electricity from coal and around 20% each from nuclear and natural gas.

A new feature on the U.S. Dept. of Energy website allows users to enter a zip code and see detailed information about their electricity sources, as well as what that means for electric vehicle carbon emissions.

In Northern Virginia, 50.47% of our electricity comes from coal, 38.74% from nuclear and 4.95% from natural gas. The remaining 5.84% comes from hydroelectric, biomass, oil, and other electricity sources.

An electric vehicle recharging in the Northern Virginia area would contribute annual CO2 emissions of 7167 pounds. In contrast, a conventional gasoline vehicle emits 13043 pounds of CO2 per year, a considerable increase. The figures are based on “well-to-wheel” greenhouse gas emissions, taking into account the production and distribution of both fuel and electricity in the calculations.

Proponents of electric cars also advocate for greater reliance on solar, wind, and other renewable sources of energy. Even though the electricity grid has a long way to go to be considered truly green, electric cars already make a significant improvement in total emissions.

There are other criticisms of electric cars. The process of mining lithium for the batteries can cause serious environmental damage. Rare earth minerals are used in the battery systems, which have an environmental impact as well. Price fluctuations in either commodity could also be harmful to the nascent industry.

Is It Worth the Money?

If you are thinking about buying a new electric car instead of a gasoline car, you will also want to consider the economic factors. Say you drive a gasoline car 15,000 miles a year and get 25 miles per gallon of gasoline. With gasoline at the price of $3.75 per gallon, the annual cost of gas would be $2,250. If your new electric car utilizes only electricity, at around $1.50 a night, the annual price tag for the electricity would be $547.50. The cost of a new gasoline car is around $20,000 and an electric car is around $30,000 (after the $7,500 tax break). The cost of the installation of the charging station could be an added $1,500.

An electric car is certainly something to be considered. Total carbon emissions are significantly reduced. There are zero emissions from the vehicle itself, which could improve local air quality. The cost over the lifetime of the vehicle is roughly equivalent to a new gasoline car, thanks in part to federal tax credits. As infrastructure develops, more electric models come out, and their popularity increases, perhaps someday we will say, “Do you remember when we used to pump gasoline into our cars?”