For as long as we are here, the sun will be here. It has been shining down its energy-rich rays on Earth for millennia, giving us life and warmth and now—a source of renewable energy that technology has enabled us to effectively harness. In only one hour, the earth receives more energy from the sun than the world uses in an entire year.

The first step in making solar power marketable occurred in the 1950s, when Bell Laboratories developed the use of silicon in solar energy capture. It wasn’t until the 1970s energy crisis and the Carter administration that solar power came into the public’s view. The energy climate is not so different today than what it was 40 years ago. With gas prices rising, the economy still crawling out of a recession and the globe warming, developing renewable resource technologies and harnessing the voluminous power of the sun have again captured the interest of many.

The benefits of clean, non-polluting solar power are not only environmental. In addition, solar power is home-grown energy, harvested on-site, which reduces reliance on oil from other countries. Many solar installations work independently of a central power grid, thus solar users enjoy some protection from summer brownouts and other peak power grid problems.

However, startup costs are expensive and solar power is still about three times as costly as electricity produced by natural gas. They are not short-term investments; it takes several years for panels to pay for themselves and they must be maintained, especially after natural disasters, large hail storms or hurricanes. Nevertheless, with costs for solar falling, panels have been proven to be more and more practically and financially beneficial for the typical homeowner.

There are two major types of solar panels: photovoltaic and solar thermal. Photovoltaic cells capture sunlight and directly convert it into electricity which can be used immediately or stored in batteries (for later or night use). PV panels are the type most people are familiar with: we see them on calculators, roadside phones, and lights on school zone speed limit signs.

Solar thermal panels, however, are cheaper and more efficient. Solar thermal panels work by using sunlight to heat liquid or air contained inside the panel. The heated medium can then be used to warm rooms in the house or preheat hot water for the tap. A typical residential solar thermal installation costs less than $10,000 for a mattress-sized panel while a comparable PV installation would cost upwards of $25,000 and cover significantly more roof area.

Photovoltaic and other solar panels are becoming more and more affordable and efficient as technology improves and demand rises. In 1977, the U.S. Department of Energy launched the Solar Energy Research Institute, now known as the National Center for Photovoltaics. Since 2002, the DOE has also sponsored a Solar Decathlon, an international competition challenging collegiate teams to “design build, and operate solar-powered houses that are cost-effective, energy-efficient, and attractive.” Improving technologies have brought panel prices down dramatically over the last five to ten years.

Although government incentives to go solar are not as generous now as they were in the 1970s, they do still make solar solutions affordable for many homeowners. The federal government offers a tax credit of up to 30% of the cost of the renewable energy system through 2016. In Virginia, residents who applied for a state tax rebate from March 2010 - March 2012 have seen as much as two-thirds the cost of solar thermal installation returned to them, and almost half for photovoltaic installations. However, the tax incentive program for solar has recently ended and in its stead the Virginia Department of Mines, Minerals and Energy (DMME) is phasing in the Voluntary Solar Resource Development Fund. Passed in 2011, the Fund allows those who are interested in installing solar to apply for loans. After building up contributions (mainly from customers of investor-owned electric utilities but also regular citizens, and other groups) DMME may begin issuing loans as early as July 2012.

In some areas of the country, companies are offering “solar lease” options for PV panel installations. That is, the company will install PV panels onto a residence at no charge; the homeowner only pays a monthly flat fee of around $50 to lease the panels, plus the cost of any extra electricity needed from the grid at night or for especially hot days. Thus, the cost of the lease and any extra grid power turns out to be the same or less than previous panel-less electricity bills.

The government isn’t the only place to find help making solar installations feasible: many neighborhoods, non-profit organizations and private solar companies have programs encouraging citizens to go solar. In 2006, individuals living in the Mt. Pleasant neighborhood of Washington, D.C. formed the Mt. Pleasant Solar Cooperative. By buying in bulk and facilitating communication between solar-interested neighbors, the Coop reduces the cost and stress of installing PV panels.

In 2010 and 2011, Arlingtonians for a Clean Environment (ACE) sponsored a “Solar Raisers” program. Modeled after a traditional Amish barn raising, Arlingtonians came together to install a fellow Arlington resident’s solar hot water heater, thereby reducing the cost of labor (around $3500). In exchange for the reduced installation cost, the recipient of the solar hot water heater dedicated their labor to the solar raising day. In less than four years, the system paid for itself, as opposed to seven to nine years.

A new partnership to buy photovoltaic solar panels in bulk among Northern Virginia residents has been promoted in 2014 and 2015 by the NOVA Interfaith Solar Co-op, a partnership of Community Power Network, Virginia Sun and Interfaith Power and Light.

With prices going down, things seem to be looking up for new solar energy consumers. Advancements in solar technologies and large-scale manufacturing has brought up demand and thus also competition in the solar industry, domestically and abroad. Large companies like General Electric and Samsung have hopped on the bandwagon developing their solar sectors. Home improvement chains like Lowes and Home Depot are beginning to include solar energy options in their sales. Solar stakeholders organize themselves to advocate for government subsidies to allow companies to make more affordable offers and other solar support. In this way, the solar industry keeps on shining and homeowners interested in capturing the power of sun have a sunny forecast ahead. 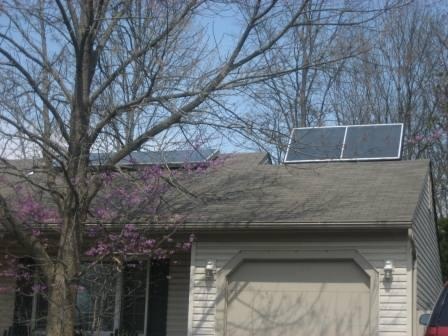 Ken Hall has been living in Centreville, Virginia for over 40 years. Since 1977, his house has been wearing solar panels that have kept the home and Hall family warm under its roof. They installed two systems: a solar hot water system and a solar space heater. The solar space heater works by drawing cold air from the house, heating it, and then blowing back the warmed air into the house.

Ken says: "[In the 1970s, the] tax rebate [covered] 90% of what you spent on your solar system. After the tax credits, it was a couple hundred bucks. It took a day and a half to install. The panels are susceptible to extreme weather conditions. [Even so,] the water system works very well, and I'd recommend that to anybody. Especially when you have teenage girls that take long showers!

Kristine Mosuela is a graduate of William and Mary and a NVSWCD intern.