The Fairfax County of Department of Transportation held two virtual community meetings on Feb. 3 and Feb. 4, 2021, to provide an update on the study that will define the phasing of transportation improvements for the Seven Corners Community Business Center (CBC).

FCDOT asked for feedback from residents and commuters in the area regarding where and when they experience travel delays as well as where they walk or bike in the area. Comments were accepted through Feb. 26.

The results of the feedback, in combination with the technical analysis, will help develop the order in which the planned transportation improvements are implemented by FCDOT over the course of the next 15 years. FCDOT plans to hold the second round of public meetings in Fall 2021 to present the potential construction phasing of transportation improvements around 2030 to receive feedback from public and stakeholders. 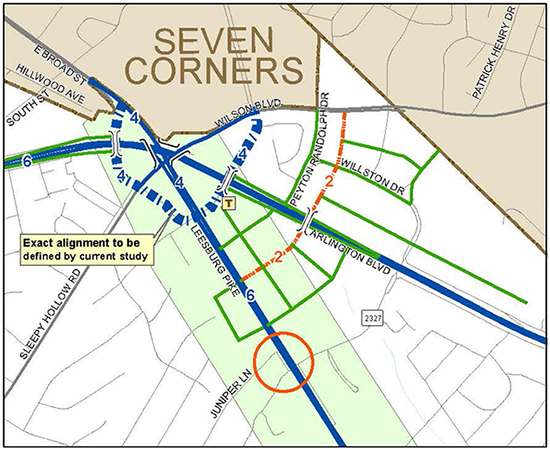 The Seven Corners Visioning and Study, which took place from 2012 to 2015, included a community task force that invited local residents, property and business owners, community and civic organizations, and others to participate in an open discussion about the future of Seven Corners. Aspects of the opportunities and challenges facing the intersection were explored and this information was provided to the community. The task force completed its recommendations in March 2015 and on July 28, 2015, the Board of Supervisors held a public hearing and adopted a Plan Amendment 2013-I-B2 for the Seven Corners Community Business Center (CBC).

As part of the adoption of Plan Amendment 2013-I-B2, ten Follow-On Motions were approved by the Fairfax County Board of Supervisors to address issues that the community expressed interest in. In response to Follow-On Motions #4 and #6, Fairfax County Department of Transportation is conducting a phasing analysis for the transportation improvements recommended in the Seven Corners Comprehensive Plan. This effort will result in developing recommendations on the projected order in which transportation improvements should be implemented to maintain a balance between the future development of Seven Corners and the associated transportation infrastructure over time.

The study commenced in June 2020 and is anticipated to be completed by Spring 2022. Fairfax County will hold another round of meetings with the public and stakeholders when the phasing scenarios with future conditions analysis are ready for review and to receive feedback.