Off We Go Into the Wild Blue Yonder

Any current or former member of the United States Air Force knows this tune, including Bill Hawkins, Herndon resident and Air Force veteran who served in Vietnam. “Hearing that song takes me back to the 1960s, back to my time in the Air Force and in Vietnam.”

Bill, an 82-year-old participant of Herndon Harbor Adult Day Health Care, utilizes the Music and Memory Service to listen to a playlist customized to his interests. During a recent interview, Bill says he will forever remember his time in the military to the tune, “Off We Go.” He kindly agreed to share much more.

“I was afraid of heights, yet I joined the Air Force!” Bill said. He became a cryptographer and traveled from his hometown of Union Springs, Alabama, to San Antonio and Wyoming for training. Then, he toured in Vietnam.

There are other sounds Bill affiliates with his former military life, like the sounds of hundreds of men rushing through their morning routines. “You get up at 4 a.m., and have 30 minutes to get dressed, through mess, and in the flight line, where it’s a bit of ‘hurry up and wait’,” he said. 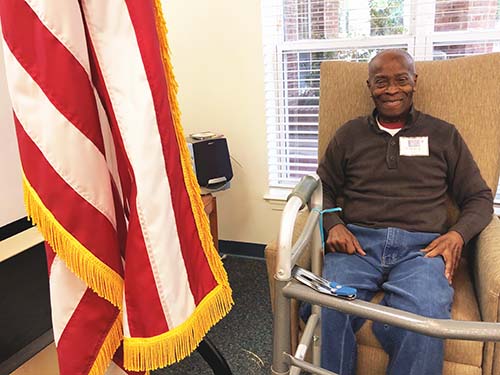 Bill’s musical memories span far beyond the military. As a child, he was a shoe shine boy at a local shoe store, Grady’s Shoe Shop, owned by Pop Grady—who was one of a handful of black businessmen in Union Springs during that time. The song he remembers from then?

“The Chattanooga Shoe Shine Boy! You gotta ‘pop the rag’ to get the good tips!” Bill said of the Red Foley song originally recorded in 1950. Bill worked his way up from shoe shiner to shoe maker, working around his school hours. At home as a child, Bill’s musical memory is of his mother. “She would be in the kitchen humming along. She was a church goer, so it was a lot of hymns,” he said.

The Herndon Harbor Adult Day Health Care Center curated a playlist for Bill based on his musical memories. It includes James Brown (the first live performance he saw), The Temptations and Aretha Franklin (because Motown makes him want to dance) and many traditional religious hymns (that bring him back to his mother’s kitchen).

“I’ll Take You There” by The Staple Singers
“Respect” by Aretha Franklin
“Respect Yourself” by The Staple Singers
“Jesus is Love” by Lionel Richie
“Order My Steps In Your World” by GMWA Women of Worship
“We are the Heavenly Father’s Child” by Rev. Gary Davis
“I Am Redeemed” by Jessie Dixon
“Never Grow Old” by Aretha Franklin
“My Girl” by The Temptations
“Papa’s Got a Brand New Bag” by James Brown

We all have soundtracks to different moments in our lives. For veterans like Bill, those musical memories speak to a time and place in American culture as much as they do to a moment in their youth. Fairfax County Health Department’s Adult Day Health Care centers will be celebrating the service of its participants who served in the military.