Jason Kim: Helping Others as a Meditation Practice

At his mother’s urging, Sang Woo “Jason” Kim left South Korea in 1963. He was just 18 and considered himself lucky to be immigrating to the United States for an education and a better life.

Surprisingly, it was not daunting for him to leave South Korea. He says that he knew he would feel at home in America—a country to which he was grateful for backing his country during the Korean War. “In my school, we flew the American flag alongside the Korean flag, which is also red, white, and blue,” he says.

After applying to a college in New York, where the family had some relatives, and passing an English proficiency test, he waited for an acceptance letter. He confesses that even though he passed the test, “I really could not converse.” Whether he could converse well or not, when his acceptance letter finally came, he packed his bags and embarked on his odyssey to a new and better life.

He arrived in Los Angeles and then continued to New York to attend Clarkson College. Prior to commencing classes, he changed his name to Jason, the American version of Sang Woo. This was not a requirement, but a personal choice. Even though he was now a Jason, the essence and meaning of Sang Woo—working man—couldn’t be more apt for his future life.

He graduated and with an advanced degree in engineering. Then, in 1973, he moved to Fairfax County for his first job in his field. Between graduating and working, Mr. Kim visited his family in South Korea, where he was introduced to a young woman, to whom he ended up proposing marriage. “It was not an arranged marriage, more of an arranged meeting,” he chuckles, “We exchanged photos and letters to get to know each other.” Bok Sung returned to America with him to begin her new life. 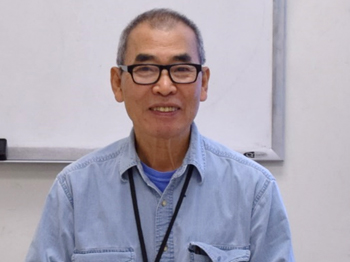 For more than 45 years, Mr. Kim has called Fairfax County his home. He and Bok Sung raised two daughters. One is now a physician and the other, a lawyer. The Kims have three grandchildren who are all in high school or college. “It’s a dream come true!” he exclaims.

Now that Mr. Kim is retired, he spends most of his time volunteering and helping others. His interest in volunteering began with his meditation practice. He meditates daily and believes the goal of meditation is to empty one’s mind, the best way to accomplish that being to deny oneself and serve other people.

For nearly 10 years, Mr. Kim has been volunteering at the Korean Central Senior Center, one of his main responsibilities being to help seniors get on and off the bus. He has also taught citizenship classes for many years.

Mr. Kim says that when he gives back to the community by volunteering, special bonds are formed. For example, he remembers one elderly woman who was a student in his Citizenship Attainment class. Despite not knowing any English, she was determined to pass her citizenship test. “She took my class many times but struggled to learn,” he says. After a year, Mr. Kim decided to give her private tutoring. “I also encouraged her to pray diligently to pass the test.” After two years of tutoring, she passed both the written and interview portions of the citizenship exam. “I was so proud of her when she became a naturalized citizen,” he says with sincerity.

There was another woman who affected him. “She unexpectedly approached me at the senior center,” he says, and “asked for help.” She had just relocated from another state and needed help finding housing and several other services. Mr. Kim took it upon himself to drive her to various senior apartments, then helped her apply for housing, food assistance, and health care.

As he was waiting to take his new friend to yet another appointment, he began to grow impatient. “Suddenly,” he says, “a stranger appeared in front of me wearing a bright white gown and smiled at me.” Mr. Kim believes that this was an angel. “It was a sign for me to continue helping others,” he says emphatically.

Mr. Kim is ready to add more joyous and meaningful volunteer stories to his repertoire. He says, “The opportunity to meet new people, the satisfaction of teaching and helping others, and the spiritual growth I have personally experienced makes it all worthwhile.”

Many thanks to Heisung Lee, Korean Senior Center director, for her help in interviewing Mr. Kim and her guidance on South Korean history and culture.