The Fairfax County Park Authority is beginning development of North Hill Park, located near the intersection of Richmond Highway and Dart Drive in the Mount Vernon District of Fairfax County.

In 2007, Fairfax County Redevelopment and Housing Authority initiated a redevelopment planning process for the North Hill site, located near the intersection of Richmond Highway and Dart Drive. The plan's purpose was to transform the site into a mixed income community with affordable and market rate housing comprised of multifamily rental apartments and for-sale townhomes. More about the overall North Hill Development Project can be found here.

As part of the overall redevelopment effort a public park was envisioned to be enjoyed by the immediate development and the broader community. A joint public process was conducted in which stakeholders, local residents, and school officials provided input in three public meetings to inform the development of a master plan. An initial master plan was approved in 2010 for the park which included descriptions of plan elements, design concerns and a plan that shows the general location of the recommended park facilities. In 2017, a rezoning of the site was approved by the Board of Supervisors with an area dedicated for park use. The rezoning plan was adopted by the Fairfax County Park Authority as the revised master plan for the park. In 2020, a 12 acre area of the site was transferred to the Park Authority for the eventual development of a park. 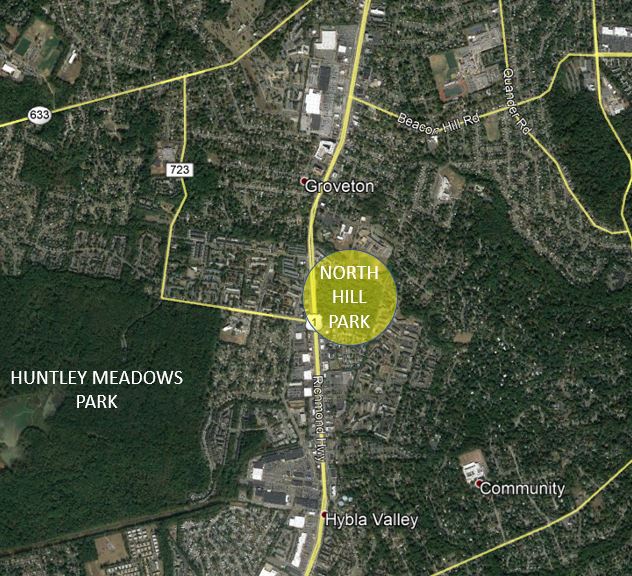 The development concept of the park was shared at a public community meeting on January 6, 2021 and the public feedback received was considered for plan refinements.  Future park facilities are anticipated to include parking, accessible trails, an open lawn, basketball court, pickleball courts, picnic pavilion, playground and fitness area.

Comments regarding the development of North Hill Park can be submitted to parkmail@fairfaxcounty.gov.

Would you like to be kept up-to-date about the development of North Hill Park? Provide your e-mail address below to receive project updates.