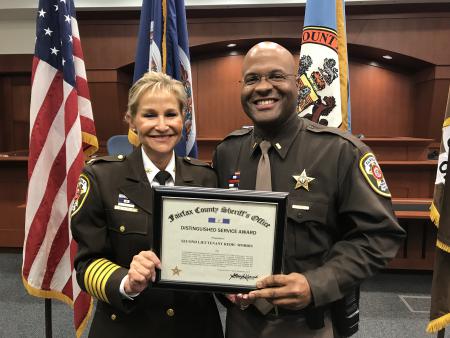 “Redic has served as a role model throughout his career. His wealth of knowledge, calm demeanor and impeccable judgment have contributed to his well-deserved reputation as a go-to-guy,” said Kincaid. “His passion is evident in all of the work he does in service to our community.”

In his early years as a deputy sheriff, Morris worked in the Adult Detention Center and quickly became a field training instructor, an inmate property officer and a member of the Sheriff’s Emergency Response Team. He established a pattern for the rest of his career of going above and beyond his routine duties.

Morris spent 13 years in civil enforcement, first as a deputy on the road serving and executing court documents, and later as a supervisor. During this time, he was instrumental in the development and implementation of the Computer Aid Dispatch/Records Management System, which created an interface between the Sheriff’s mobile computer terminals and Fairfax County’s dispatch system.

In 2016, after serving two years as the in-service training coordinator at the Fairfax County Criminal Justice Academy, Morris’s career took a new turn. Sheriff Kincaid assigned him to the Merrifield Crisis Response Center (MCRC) where he continues to play a significant role in support of Diversion First, a collaborative effort to reduce the number of individuals incarcerated with a mental illness.

Morris supervises the team of deputies at MCRC who take custody of individuals in crisis who were diverted from arrest and transport them, if deemed necessary by clinicians, to local mental health hospitals. He coordinates Crisis Intervention Team training for deputies and Mental Health First Aid training for all Sheriff’s Office staff. In partnership with the Fairfax-Falls Church Community Services Board and the Fairfax County Police Department, Morris gives public presentations about the goals, progress and challenges of Diversion First.

“It’s staggering to see how many people come to us experiencing a mental health crisis,” said Morris. “This job is one of the hardest I’ve had, but it’s very rewarding. I can leverage the skills I’ve developed over the years to effectively interface with other agencies and organizations. Working collaboratively, we are making progress by getting people into treatment and avoiding or reducing jail time.”

Throughout his career, Morris has received numerous awards recognizing his outstanding performance, his courageous actions and his commitment to teamwork. “Redic certainly embodies our core values of honor, courage and service,” said Kincaid.