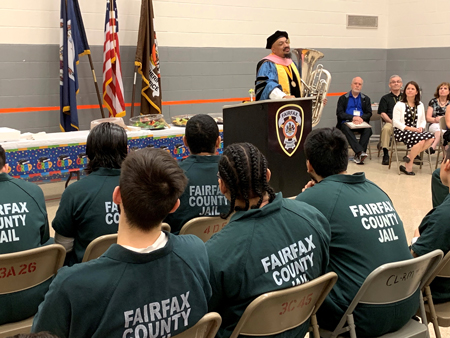 The GED commencement ceremony at the Fairfax County Adult Detention Center (ADC) was quite the celebration. For the 2018-2019 school year, Fairfax County Public Schools (FCPS), in partnership with the Sheriff’s Office, awarded GED certificates to 28 men and women during their incarceration. An additional 30 inmates passed one or more of the four tests on their way to earning a GED.

George Mason University (GMU) Associate Professor of Music, Dr. Michael W. Nickens (aka Doc Nix), delivered the keynote address, playing classical and jazz music on his tuba, along with his remarks. Named the 2016 Faculty Member of the Year by the GMU Alumni Association, Nickens is best known as the leader of GMU’s Green Machine, ranked by the NCAA in 2015 as the top pep band in college basketball.

Nickens spoke to the inmates about his path to becoming a teacher. “My pops was gone before I was even a year old. My fathers were my music teachers, my basketball coaches and teachers in the classroom. That’s the reason why I wanted to dedicate myself to being a teacher, to make sure someone else like me doesn’t slip through because no one is looking out for them.”

Nickens considered trying to be a mathematician or a scientist, but “it was obvious on a daily basis that it was going to come back to this,” he said, pointing to his tuba. He spoke about being flexible in his pursuit of music. “If it’s ‘one size fits all’, it probably fits nobody.”

“Let this day be the beginning, not the end, of a lifetime of learning,” Kincaid said. “Let this achievement give you the confidence to pursue a positive path for the future.”

Over 30 years ago, an inmate named John dropped out of high school after the 10th grade. This year he earned his GED in the ADC and spoke at the commencement. “To date, this has been my greatest achievement in life. As Sheriff Kincaid said [at the start of the ceremony], an education is something that can never be taken away from you. I only wish it hadn’t taken so long for me to realize this.”

The GED tests offered inside the ADC are the same as what is available on the outside. The jail-based education team helps inmates transition to the equivalent community-based programs if they are released prior to attaining their high school credentials.

In addition to education opportunities, the Sheriff’s Office provides programs for inmates that focus on employability and workplace skills, financial planning, responsible parenting and anger management. Other classes, such as yoga, art and sewing, help reduce stress, teach mindfulness and build self-esteem.

Interested in volunteering with inmates at the Adult Detention Center? Learn more.