The Sheriff’s Office inmate sewing class teaches a marketable skill and provides many side benefits. First was the switch to in-house repairing of inmate jumpsuits, saving the county thousands of dollars every year on outsourcing. Next came the making of colorful quilts with donated fabric, benefiting individuals and families living in homeless shelters.

Now, our inmates are making cloth face masks for people in need.

“I love it!” says an inmate named Tram. “It’s definitely therapeutic, and it’s a positive feeling knowing we are giving back to the community.”

Tram knew nothing about sewing until she signed up for the class in 2019. A deputy who had researched several mask prototypes met with Tram on a Friday in early April to discuss the options and gave her more material with which to work. The following Monday, Lt. Lucas Salzman, a supervisor in the Alternative Incarceration Branch (AIB) where the sewing class is housed, went to check on Tram’s progress. On her own, Tram had made several different versions and listed the pros and cons on a whiteboard, suggesting a version she thought would work best.

“We went with her recommendation and later dubbed it the TN1,” said Salzman. “It was easy for her to make and used only materials that we had in the AIB from donations to the quilt making program. She was making 50-60 masks per day.”

The initial goal was to have enough masks to issue two each to every inmate in the AIB and on the Adult Detention Center workforce. Once that goal was reached, the Sheriff’s Office would have every inmate who moved around the facility wearing a mask whenever they were outside their housing units.

Since then, Tram has perfected a different version of the cloth mask, dubbed the TN2. 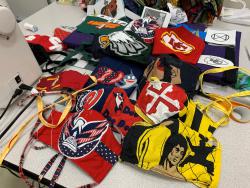 In mid-May, the Fairfax County Health Department put out a call for donated cloth masks. Lt. Salzman and Tram were ready to go. By then, two more inmates had joined the sewing class. Tram had enough experience and talent for sewing that she assumed responsibility for teaching the newcomers. Both credited Tram with being a great teacher. With all three sewing, mask production has increased tremendously.

Salzman checks on the inmates regularly and urges them to take breaks, but they want to keep on working. “Sewing makes the time go so fast,” explains Tram. “Each day that passes is another day closer to going home. And with each mask we make, it’s another life that might be saved.”

Salzman is optimistic about Tram’s rehabilitation. “As a result of her learning to sew and feeling so enthusiastic about it, I believe she will have more positive opportunities post incarceration than what she might have had without this experience.”

If you have leftover fabric to donate, please email the Sheriff’s Office.