Fairfax County Courthouse security took a leap forward this year when high resolution digital cameras replaced the old analog models. Gone are the grainy pictures in which people and objects are hard to identify. Now, Sheriff’s deputies on the facility security team have a clearer picture of who is entering the Courthouse.

On the morning of July 17, a man reported that his wallet was stolen from the conveyor belt during screening at the front entrance of the Courthouse. A private security firm conducts the initial screenings with oversight by the Sheriff’s Office. The man said the contents of his wallet included his driver’s license, a bank debit card, a credit card and $200 in cash.

Deputies who monitor 314 cameras reviewed the morning’s footage and documented the following:

How to Catch a Suspect 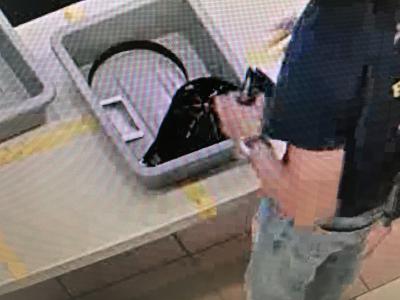 Using the footage from various camera angles, deputies tracked the man’s movements to and from a courtroom. By reviewing the list of defendants in that courtroom and conducting an online search of names, the deputies matched a Facebook photo to the video footage to get positive identification. The suspect’s Facebook profile included several photos of him wearing shirts with the same logo that he wore to the Courthouse. He had been in court for a traffic violation.

Shortly after the theft, the victim’s bank card was used at an ATM in a Metro station in Washington, DC. The Sheriff’s Office obtained warrants for misdemeanor petit larceny and felony credit card theft.

On August 29, the man was arrested at his home in DC. On September 5 he was extradited to the Fairfax County Adult Detention Center. He is out on bond until his court date in October. Our cameras will be watching.