By anyone's reckoning, it's a unique and glorious achievement for one American county -- a trail over 40 miles long connecting the entire county from one end to the other -- the Gerry Connolly Cross County Trail (GCCCT of Fairfax County, Virginia.)

The Gerry Connolly Cross County Trail has been divided into ten sections (plus an additional section for the Laurel Hill Greenway - LHG) for purposes of mapping.The individual section maps show neighborhood connections, parking, and amenities such as restrooms and water fountains. 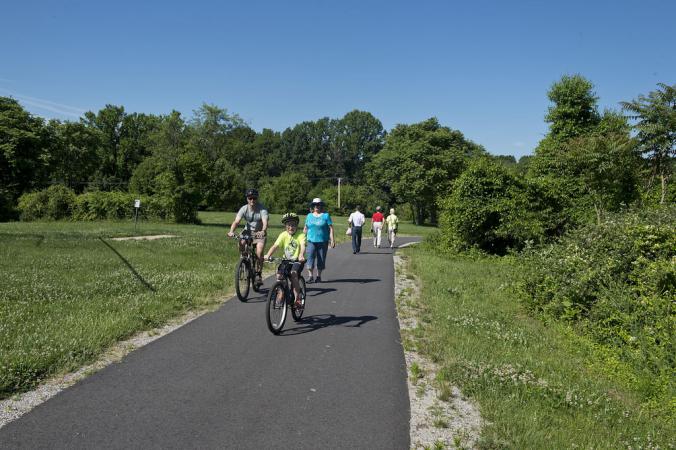 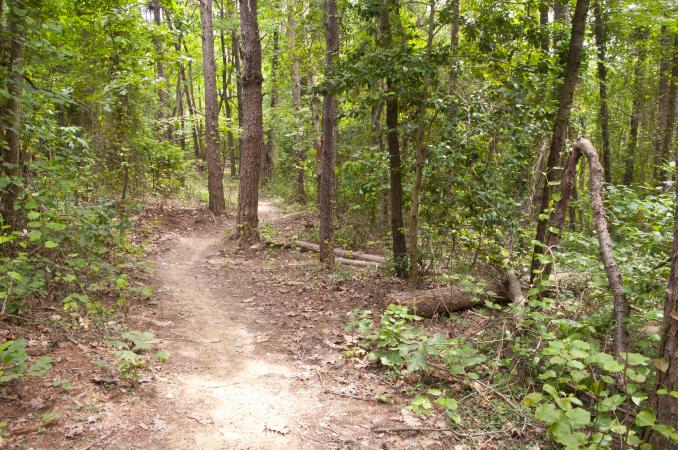 Browse local trails and discover the extensive network of Fairfax County Park Trails with Trail Buddy. Fairfax County offers over 900 miles of trails, bikeways and sidewalks for non-motorized transportation that have been mapped using a Geographic Information Systems database.

More About the Cross County Trail

Bluebells and Bluebirds in a Utopia of Green

The Cross County Trail runs through some of the county's most scenic areas, beginning at Great Falls National Park on the mighty Potomac River and extending south to the Occoquan River and Laurel Hill, formerly known as Lorton Prison.

Here, hikers, joggers, equestrians, strollers and cyclists can discover a natural wonderland. Springtime finds the woodland floor adorned with carpets of wildflowers including bluebells, cut-leaved toothwort, trout lilies and harbinger-of-spring. Increasingly rare, many of these plants grow only in protected stream valley environments. The trout lily, which blooms for only about two weeks in mid-April, takes seven seasons before it is able to put forth a flower.

Trees in the stream valleys like to get their feet wet. River birch, sweetgum, pawpaw and species of willow and alder all thrive in the rich, moist soils found in the trail's floodplain. But the noblest of all must be the sycamore, whose smooth, light bark stands out in sharp contrast to the darkness of the surrounding forest. The sycamore may grow to a diameter greater than that of any other deciduous tree of North America, reaching a span of 10 feet. Wildlife thrives on trail lands. Birds (including rare raptors), deer, muskrat, fox and other critters abound.

It was in 1995 that hiking enthusiast Bill Niedringhaus walked into the office of the Park Authority Trail Coordinator and presented his idea for connecting existing trails.

Flora of the Cross County Trail

Then Chairman Connolly summed it up this way, "I think we're going to be leaving behind for future generations a real gem. And it's a gem that's going to be protected - a natural environment that's very surprising in a county as rapidly urbanizing as Fairfax County is."  Most of our Cross County Trail lies within stream valley parkland. This parkland serves many purposes, but one of the most important is to protect our streams. The vegetation near streams helps to intercept nutrients carried from surrounding land before it enters a stream, and the roots of the vegetation help to prevent erosion.

A happy benefit of this for folks enjoying our trails is the rich diversity of plants that adorn the trailside. Wood frogs, spring peepers, American toads, and spotted salamanders are a few of the amphibians that take advantage of vernal pools for reproduction. The benefit of laying eggs in a vernal pool is that there are no predators such as fish to gobble up the nearly defenseless tadpoles or larval salamanders. Nature's gamble is that these amphibians will develop fast enough to leave the pool before it evaporates. If the gamble fails and the puddles disappear early due to a dry spring for instance, a whole generation of amphibians may be lost.

This is just one example of how important it is to protect our wetlands. We try to locate our trails away from sensitive areas like vernal pools. When using our trails, please stick to the path. Nature's amphibians need all the luck they can get!

"Citizen's advocacy is really the precursor to action."

Gerald E. Connolly, Then Chairman, Fairfax County Board of Supervisors

The Cross County Trail is a strong symbol of community connections for its involved citizens. Hundreds of volunteers give irreplaceable time and talent to county non profits, fire stations, schoolrooms and the Park Authority (the agency's eight nature centers and historic sites boast 700+ volunteers, making it the envy of the nation). And sometimes, citizens blaze trails.

Niedringhaus recalls, "In 1997, I got interested in trails more broadly around Fairfax County. I did my homework. I learned how to do the research in the courthouse and looked up records."

He obtained a large map of the county and highlighted all of the public land green. It was then he saw a continuous green line snaking down from the north to the south across the county with maybe three or four gaps. With friends, he formed a group called Fairfax Trails and Streams and spoke at the park bond hearings in 1998. "I think that was the first time they'd ever had anybody testify for trails," he said. But Board of Supervisors Chairman Gerry Connolly was very supportive and instrumental in keeping the ball rolling at the top. With Fairfax Trails and Streams working from the citizen activist standpoint, it all began to take shape."

"I realized that Fairfax County had a jewel in its midst," Connolly said. "Why not work to connect these existing parcels of land, acquire and obtain needed pieces of property and easements to make one long trail?" The next day he introduced a resolution to create the Cross County Trail. The county's entire board supported it, providing additional resources and obtaining federal support.

Bikers and Riders Jump on Board

Beverly Dickerson, former president of the Hunters Valley Riding Club and a member of Fairfax for Horses, remembers when she first heard of the trail, "The county has been farsighted in setting aside places like this, very proactive in trying to obtain the property and establishing recreational uses."

Randy Kerr of MORE (Mid-Atlantic Off-Road Enthusiasts), became involved in the effort. Kerr said that one interesting aspect of watching the Cross County Trail take shape was the role volunteers played. "It's all about connections," Kerr said. "Bikes, hikers, neighborhood dog walkers. Not only using the trails, but in maintaining the trails. Trails provide obvious benefits throughout the county."

Much of Fairfax County's Cross County Trail lies within green, shaded stream valleys. Off limits to developers, the county's stream valleys support biodiversity and wildlife. It offers a rough Appalachian Trail-like experience. Some of it is stone dust. In some places there is a lot of mud. "People call and complain that there's snow on the trail. Well, we don't plow the trail. Get your cross-country skis out. It's a natural, outdoor environment. It's maintained, but it's not groomed. That's the beauty of it. That's why it's great."

"We see ourselves as stewards of the natural area, stewards of the land. We work very hard to choose plant life we had to remove for the trail. It's always a challenge, but then when we get a look at the trail's end it's always been well done. It looks awesome. We're happy to have been able to make it happen."
Manager of Park Authority Mobile Crew

By the fall of 2000, the planning team developed a blueprint to connect the stream valley trails. The Park Authority Director and the Park Authority Board worked closely with the Board of Supervisors to secure funding. The board allocated $900,000, and the county realized significant savings by doing things in house.

In the shadow of the Beltway in the Accotink Stream Valley, staff from Park Planning and Development designed and managed the largest construction project in the Park Authority's history, building over a mile of asphalt and concrete trail, and installing three concrete stream crossings. In swampy areas, volunteers and staff brought in stone to stabilize the wet ground. Some areas required stepping stones over creeks or culvert pipes under the trail to provide dry places to walk or ride.

Park Authority area managers oversaw the trail markers. The signs are made of recycled plastic and fiberglass, marking the trail from one end to the other. The signs are durable and are buried deep to deter vandals, one of the scourges of the park system.

Top Reasons to Use the Cross County Trail

•Traveling the CCT is a beautiful way to see the variety of stream valleys in Fairfax County and a good opportunity to view a cross section of the county's topography and development.

•You can access both the Vienna Metro and the Franconia/Springfield Metro from connectors to the trail.

•You can access the Washington and Old Dominion Trail from the CCT.

•It's an excellent exercise venue away from the noise of the city traffic.

•You can run with your child or your leashed pet, ride a bike or a horse, skate, skip or take a leisurely stroll.

•It's close by, running from the Occoquan River in the south to the Potomac River in the north. •You can find a wide array of wildlife and fauna along the trail.

•You will almost always see a deer, hear a bird or recognize a favorite flower in bloom.

•It's the perfect place to meet other trail enthusiasts and discover opportunities to volunteer.

•It's fun, and it makes you feel good!