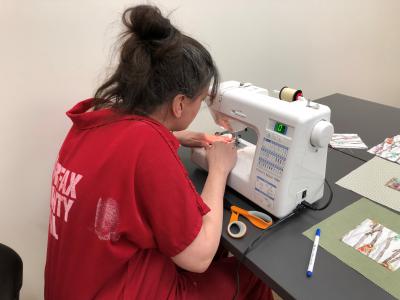 “It’s a win-win for Fairfax County and our inmates,” says Lt. Lucas Salzman, describing a new sewing program in the Alternative Incarceration Branch of the Adult Detention Center.

In July 2018, the Fairfax County Sheriff’s Office created a sewing class with the help of two volunteers. The objective was to offer inmates a marketable life skill and save the county money at the same time. The results in both areas have exceeded expectations.

The average daily population of the Adult Detention Center is about 1,000 inmates. Every inmate wears a jumpsuit, which they exchange for a clean one every three days. Members of the inmate workforce – including kitchen, laundry and janitorial crews – get a clean uniform every day.

After jumpsuits are laundered, the workforce inspects each one for tears and missing snaps. In 2017, the Sheriff’s Office sent out for repair an average of 200 jumpsuits per month at a cost of $5 each. That amounts to $12,000 per year. Since each jumpsuit costs about $15 to $17 to replace, damaged jumpsuits were disposed of after three repairs.

With an investment of $3,600 in durable sewing machines and related equipment, the Sheriff’s Office now repairs all jumpsuits in-house. Additionally, as long as jumpsuits can be repaired, the three-and-done limit is no longer in effect. With the annual cost savings, the sewing equipment paid for itself in less than four months, and there has not been a need to purchase more jumpsuits. 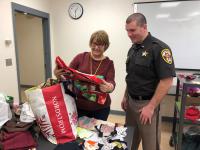 Salzman said that once the participants learned to sew, they were working so efficiently that they often completed the repairs before the class period was over. They would ask for more work. Thus, the quilting project was born.

Using donated pieces of fabric and their own imaginations, “they are expressing themselves artistically,” says volunteer sewing teacher Sheila Bohannon. She plans to donate a sewing machine to one of her students who leaves the jail and wants to continue sewing.

Later this month, the Sheriff’s Office will give several quilts to the Embry Rucker Community Shelter in Reston at the request of a class member who once benefited from the shelter’s services. 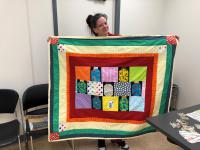 Andie is a class member working on her third quilt. “I love this program,” she said. “I had never sewn before, and it made me nervous. But the two volunteers are phenomenal teachers. This will be a wonderful trade to have on the outside. I think Fairfax is a great jail for helping people.”

Inmate re-entry programs are a top priority for Fairfax Sheriff Stacey Kincaid. If you have a life skill to teach and are interested in working with inmates, please contact our inmate programs office and register in Fairfax County’s Volunteer Management System.