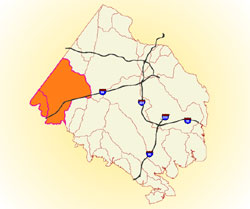 Unique Features
14 square miles of Loudoun County drains to these watersheds. While the impacts of these areas will be evaluated, the watershed plan does not extend into Loudoun County. These watersheds drain into the Occoquan Reservoir, which supplies drinking water for areas of Fairfax County and other local jurisdictions.