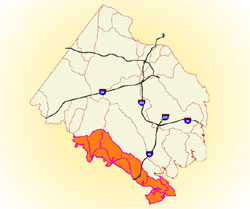 Unique Features
Approximately half of the Lower Occoquan watersheds area is overlain by the Watershed Protection Overlay District. This zoning district was established in 1982 by Fairfax County in a progressive move to protect the Occoquan Reservoir, a major source of drinking water for the county. This designation restricts development to one residential dwelling unit per five acres, thereby protecting the streams draining to the reservoir from the damaging impacts of more intense land development – primarily nutrient and sediment pollution.

The Lower Occoquan Watershed Management Plan was adopted by the Board of Supervisors on Jan. 25, 2011.