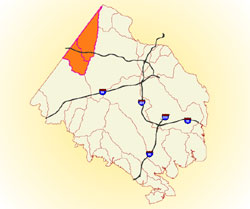 Unique Features
The town of Herndon is on the border between the two watersheds. Part of the Dulles Airport property is in the Horsepen Creek watershed and Frying Pan Park is also in this watershed.

The Sugarland Run and Horsepen Creek Watershed Management Plan was adopted by the Board of Supervisors on Dec. 7, 2010.