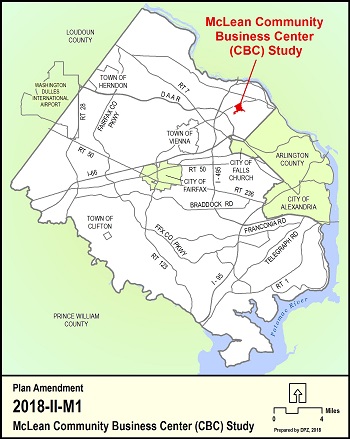 In an effort to reimagine the vision for downtown McLean, also known as the McLean Community Business Center (CBC), Fairfax County kicked off the McLean CBC Study in May 2018 with a community visioning process. Community input from the visioning process workshops and guidance from design and planning firm Streetsense resulted in the creation of a Vision Plan which was finalized in December 2018. The Vision Plan is the framework for considering changes to the current Comprehensive Plan recommendations for the CBC.

County staff has been working closely with Task Force members and the community at regular meetings to discuss recommended changes to the Comprehensive Plan for the McLean CBC, using the Vision Plan as a primary guide. Staff and the Task Force reviewed submissions that were received for the CBC as part of their work. Task Force discussions on new draft Plan text began in February 2020. The recommendations will continue to be discussed at Task Force meetings in the months to come. Those who live or work in downtown McLean and the surrounding area are highly encouraged to get involved and share feedback on the proposed changes to the Comprehensive Plan for the McLean CBC.

Click on the map (above) for a detailed enlargement of the study area.

Staff is revising the initial draft Comprehensive Plan text based on comments received from the public. It is anticipated that the first section of revised draft Comprehensive Plan text will be posted to the McLean CBC website in early May, and the second set will be posted in mid-June. All task force and community meetings have been postponed due to COVID-19 and will be rescheduled at a later date. Please refer to this website for the latest information about public meetings and public hearing dates.

To receive e-mail updates, visit the e-mail subscription page and subscribe to “McLean CBC Study news and information”. You can also follow us on the Fairfax County Land Use Planning Facebook Page for additional news and updates about land use in Fairfax County.

The first set of draft Comprehensive Plan text has been revised based on feedback from the community and the task force. Proposed text changes are shown as underline and text proposed for deletion is shown as strikethrough.

The draft Comprehensive Plan text for the McLean CBC is available for public review. It is divided into two sections, linked below. Any comments or questions on the draft recommendations should be emailed to DPZMcLeanCBC@FairfaxCounty.gov.

The public is welcome to attend any and all McLean CBC Study Community Task Force Meetings.

Any comments or questions should be emailed to DPZMcLeanCBC@FairfaxCounty.gov.

Review the comments received on Sections I and II of the draft Comprehensive Plan text below:

Once all public input has been shared with Task Force members and all recommendations have been considered, county staff will work with Task Force members to finalize recommended changes to the Comprehensive Plan. Based on the current schedule, the final recommended Comprehensive Plan for the McLean CBC will be presented during public hearings to the Planning Commission and Board of Supervisors later in 2020. Once scheduled, the public hearing dates and more information about the hearings will be provided here.