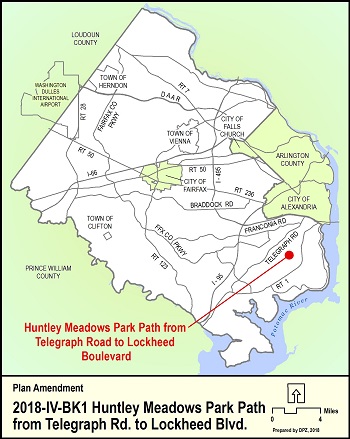 On March 20, 2018 following the approval of Plan Amendment 2015-IV-MV1 (Embark Richmond Highway), the Board of Supervisors authorized the consideration of a Comprehensive Plan amendment for the planned bicycle facilities within Huntley Meadows Park (Tax Maps 92-1, 92-3, and 92-4) in the Mount Vernon Planning District, Lee Supervisor District.

The adopted amendment removes the shared use path recommendation from the Plan. Plan Amendment 2017-IV-BK1 (Huntley Meadows Park Trail from Telegraph Road to Lockheed Boulevard) was also adopted with this amendment.